Banyana Banyana national women’s captain Janine van Wyk is back from a six-month stint in the United States where she played for Houston Dash in the National Women’s Soccer League.

With the season over, she’s back home in South Africa while she contemplates her next move.

She last played for Banyana Banyana earlier this year in January against France in an international friendly match held at the Reunion Islands.

The defender has now been included in the upcoming international friendly match against Burkina Faso scheduled for next Sunday at Dobsonville Stadium, Soweto (3pm kick-off).

Van Wyk spoke to SAFA.net about her experiences.

You have been saying this was a dream come true for you, how was the experience?
Janine van Wyk: ‘It was phenomenal, it was an incredible experience for me. I’ve always wanted to play overseas and I can finally say I have done so. It wasn’t an easy run in for me, in fact it was very difficult at the beginning but I think the best experience was playing professionally and getting a very big crowd every single game – the biggest crowd was at Portland Thorns in Portland with about 22,000 fans. That experience on its own was amazing, and is something that we can really hope that it will happen in South Africa once we have a professional league going. So many people can come to support women’s football in our country.’

Is it what you expected?
Van Wyk: ‘You go out there and expect it to be challenging and competitive football every single week, and that is exactly how it panned out. I got to play the world’s best players – I got to play alongside Carly Lloyd (Houston Dash, USA National Team) and it was amazing. I played with the like of Megan Rapinoe (Seattle Reign FC, US national team), Christen Press (Chicago Red Stars, US national team), Morgan Brian (Chicago Red Stars, US national team) and Marta (Orlando Pride, Brazil national team) – it was an incredible experience and playing against them you have to expect to work for the full 90 minutes. That’s how I expected it to be like.’

And thanks to that you have grown as a player… ?
Van Wyk: ’It was really high level for me, it has helped me grow my game because every single week you played a very competitive match, and it makes you a fitter and stronger player. You also deal with different circumstances every week that you need to try and figure out, and that on it’s own grows you as a player.’

How different were things compared to South Africa?
Van Wyk: It was really different than here in South Africa because in the Sasol League you sometimes you get very tough opposition then the next match it is not such a competitive game, or the level will not be as high – I feel that’s where your game can drop a little bit, when you play a team that is not physically strong and demanding and you end up taking it easy. But over there every match is very competitive, and that is what has grown me into a better player.’

What else have you learnt?
Van Wyk: That it doesn’t matter how good you are as a player, how many caps you have for your country, how old you are, how experienced you are – it all comes down to performance. I have learnt that you have to be on top of your game every time you play and perform well, because if you don’t you will be on the bench. Most importantly I have learnt that performing well starts at training.’

As a South African and national team player, what did you teach them?
Van Wyk: ‘One aspect that I brought to Houston Dash was my leadership qualities, being able to help and guide the players around me, and it is something that was said to me – that some of the players last year didn’t have that leadership role model that could be able to guide them in the right direction – that is a positive on my side.’

In terms of matches, how many did you play?
Van Wyk: ‘We played 24 games in the season, which was not easy. We got to play one team three times in a season, which was for me awkward and weird to adapt to because never have I played one team three times in a season. Sometimes you would play one team this week, and the following week it is exactly the same team, and two weeks later it is the same team again, so it was really hard to adapt to but I guess that’s how they play. Out of the 24 games in the season, I managed to play 17 – I won seven with the team, drew two and lost eight. I think it was a pretty good overall season for me, and a successful one as well.’

With the season over, what happens now?
Van Wyk: ‘For now I’m back, and I’m really happy to be back. My priority and focus turn to Banyana Banyana, where I really missed playing for and unfortunately I wasn’t able to go to the COSAFA Cup, but they did an incredible job and I would like to congratulate them on a fine performance. I always knew they would do well, get the gold and bring back the trophy. This is good for the national team in that even though we don’t get to go to camp often, we are still able to get on the field, play together, win games and have success at these tournaments. This gives us an extra boost going forward to whatever competition we play next, so I really think it’s good that we were victorious. I have missed my teammates in the national team, my last game with them was against France in January in Reunion Islands. I will get to meet them soon and tell them all about my experiences.’

What advice would you give to those players that still want to play abroad?
Van Wyk: ‘Always be ready for whatever comes your way. It’s really hard to adapt to any style of play when you go play overseas. You have to deal with a different culture, the team, and you really have to be on top of your game and do your best every single match and at all the training sessions. Also, never be negative because you will find people that will try to put you down, and that is something I needed to deal with when I first got to America – your teammates aren’t your friends and you have to prove to them what you can bring to the game, and that side it is very difficult, but it will always be a part of a great journey for you and will grow you as a player. So be prepared for the worst, but you really need to prove yourself in order to make things happen for yourself.’ 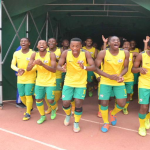 Amajimbos make history and are heading for the World Cup 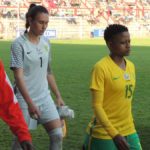 Banyana need to up their game says ‘keeper Barker

By GARY LEMKE in Tokyo On the third day of staying in the Paralympic village bubble “it” finally dawned on me. “It” wasn’t the sheer visual aspect of the 4 000-plus Paralympians with disabilities all in the same environment of towering 17-storey apartments and surrounded by a 4km perimeter fence. Admittedly, that is the initial and most common conclusion of… END_OF_DOCUMENT_TOKEN_TO_BE_REPLACED