Son captured a four stroke victory in the season-opening Boland Junior Championship at Robertson Golf Club in week one and sealed the double celebration with a champion’s performance in her title defence at the Nomads Western Province Junior Championship this past weekend.

It was almost a case of déjà vu for Son, who replicated her winning march at Durbanville Country Club last year with another wire-to-wire exhibition at Kuils River Golf Club to seal a two shot victory on 15 over 231.

The petite 15-year-old from Country Club Johannesburg braved very windy conditions to open with a two-over-par 74 to take control of the championship and added another 74 to keep pole position. Although she signed off with a battling final round 83, her patience in the strong wind paid off with another trophy finish.

‘The wind was blowing really hard on Saturday afternoon in the first round and it was even stronger on Sunday in the final round,’ said Son.

‘Luckily I learned a lot from playing in similar conditions in the Nomads Western Province Junior and the Curro SA Junior International last year.

‘The biggest challenge is keeping the ball in play. The course was in fantastic condition and the greens were fast and rolling beautifully. I expected to drop some shots, so I just did my best to stay as patient as possible and took advantage of the holes that played downwind.

‘I must admit, I’m pleased as punch because the Nomads Western Province Junior was my first provincial breakthrough last year and I really wanted to defend my title. It was also a really special to have Sally Little watch us in action in the final round. She is such an icon of women’s golf in South Africa and we all aspire to follow in her footsteps one day.’

‘Thanks to generous sponsorship of Nomads Western Province, we were able once again to host this championship for our local and visiting players to give them the opportunity to gain valuable experience at championship level,’ said Womens Golf Western Province president Sarah Braude.

‘We were treated to some exceptional shot-making in testing conditions and it was wonderful to see how the players rose to the challenge. It was also a real treat for the juniors to meet two-time Major champion Sally Little, who joined us on Sunday and handed out her trophy (Sally Little trophy) and the prizes for the B Division.

‘Western Province Golf also greatly appreciates the support and funding assistance from the Western Cape Department of Cultural Affairs and Sport, as well as the Cape Town Sports Council for junior golf in the province. Their support in particular for our Junior Development Programme goes a long way to providing the opportunity for girls to develop their golfing ability whilst in the programme.’ 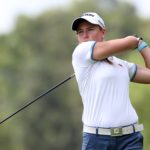 Hall holds on to Championship lead in PE 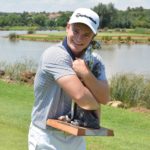 Conradie in seventh heaven after victory in Centurion