Commonwealth Cup football hosts Russia and South Africa clash in a titanic quarter-final encounter on Wednesday evening – a match that both country’s coaches termed a final before the final.
South Africa, who hosted the 2010 World Cup, will take on the next hosts of the biggest sporting event on the universe in this Commonwealth Cup Under-20 tournament.
Russia welcomes the football family in 2018 and the match between the two (Amajita and their Russian counterparts) has been billed as the match between 2010 and 2018 World Cup hosts.
Amajita finished second in Group C which comprised group leaders Tajikistan, Kazakhstan and Lithuania; drawing two games and winning the other 3-1 against eventual leaders, Tajikistan.
The match will take place at 6pm (SA time), having been changed from an afternoon slot to the last evening match.
‘It would have been a perfect encounter had the two met in the final but this is still the game of the tournament regardless of the outcome,’ said Russia U-20 head coach Nokolay Pisarev.
The 47-year-old said Amajita had impressed the neutrals here and together with hosts Russia, were the tournament most favoured teams.
‘That is why this quarter-final match had to be changed from the original afternoon slot to accommodate an expected big crowd. We should have a full house tonight,’ said Pirasev.
‘We are not very much worried about the ultimate outcome of this encounter. We just want to entertain football fans who have supported this tournament through and through. South Africa are fast and comfortable on the ball but we will use our athleticism to unsettle them.
‘This should be the real deal,’ he laughed.
His South African counterpart, David Notoane, pictured above said his side were determined to go all the way in this tournament and there won’t by sentimental feelings when they meet Russia.
‘They have been good hosts; all countries have been warmly welcomed, treated like kings – in fact the general hospitality has been marvellous.
‘The Russians are going to have a fantastic World Cup. They are doing the right things and the people are very warm and friendly,’ said Notoane.
“But we must forget about all that this evening. We are here to represent South Africa and we must aim to win this cup but first of all we must push Russia aside to achieve this goal,’ said Notoane.
The tough talking coach said apart from few niggling injuries, as expected in this long tournament, the team had a clean bill of health and were raring to go this evening. ‘We are ready and we assure South Africa that we will give it our all,’ he concluded.
The other quarter-finals are: Kyrgyzstan – Finland, Belarus v Kazakhstan and Tajikistan v Turkmenistan.

Basetsana’s Salgado says team are out to restore pride 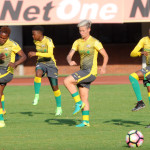 Ellis and Banyana look to turn things around against Nigeria

Tokyo looms, again, We don’t know for sure in what shape of form the Olympics and Paralympics will take place in July to September and if anything 2020 taught us to take nothing for granted. What we do know is that if Tokyo 2020 +1 does go ahead, it will do so against a new-found back drop where simply taking… END_OF_DOCUMENT_TOKEN_TO_BE_REPLACED