Banyana Banyana striker Zanele Sukazi scored her second goal in as many matches as the South Africans outplayed a tough-tackling Tanzania 1-0 in their final Group B soccer fixture at the COSAFA Championships on Tuesday.

The match was played at the Gwanzura Stadium in Harare, Zimbabwe. After a goal-less first half in which the Sasol-sponsored Banyana Banyana dominated ball possession and had the best scoring chances, striker Noko Matlou ÔÇô despite the challenge of Tanzanian goalkeeper Fatuma Jawadu ÔÇô flicked on a header in the 60th minute. This allowed University of Johannesburg striker Sukazi to rise high and head the ball home to ensure the Banyana Banyana’s 100% winning streak in three matches at the tournament.

With three minutes of play remaining, the South Africans could so easily have doubled their lead. Team captain Amanda Dlamini stretched full length to turn the ball goalwards, only to watch her effort rebound into play off the Tanzanian goal post.

ÔÇ£Tanzania played a very physical game against us, but perhaps at the end of the day that is just what we needed after a 4-1 win over Zambia and a 4-0 victory against Botswana, as we prepare for Thursday’s semi-finals,ÔÇØ said Banyana Banyana caretaker coach Joseph Mkhonza afterwards.

ÔÇ£Our defence has conceded just one goal in three outings at this tournament and that was a mistake from one of our midfielders, not one of our defenders. So our rearguard is handling the pressure really well and our midfield is settling in well on creating scoring chances for our strikers,ÔÇØ added Mkhonza.

Experienced defender Janine van Wyk, who collected a gold medal with her club Palace Super Falcons at the Sasol League National Championships 10 days ago, was happy with the performance of the team. ÔÇ£We want to do well in this tournament which is a form of preparation before we play the Olympic Qualifiers against Ethiopia in August and September.ÔÇØ

With hosts Zimbabwe comfortably on top of Group A, the South Africans will face either Lesotho, Mozambique or Malawi in their semi-final match at the Rufaro Stadium on Thursday. 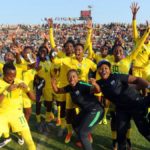 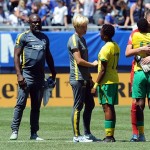 Banyana call-ups for Silindile and Katlego

Tokyo looms, again, We don’t know for sure in what shape of form the Olympics and Paralympics will take place in July to September and if anything 2020 taught us to take nothing for granted. What we do know is that if Tokyo 2020 +1 does go ahead, it will do so against a new-found back drop where simply taking… END_OF_DOCUMENT_TOKEN_TO_BE_REPLACED