There are some athletes who might be more than happy with a 20th place finish in their first World Under-23 Triathlon Championships.

But Wian Sullwald is not one of them! As a former world junior champion he knows he is good enough to beat the world’s best. ÔÇ£I guess that to finish 20th at a World Championship is not really a bad result, but I am disappointed because I know I am capable of doing better,” said Sullwald,

Sullwald’s medal hopes literally “sank” the moment he was “dunked” by another athlete during the swim. ÔÇ£An athlete to my right swam right over me, pushing me under the water in the process. I struggled to get to the surface again because, within seconds, a few more athletes swam over me.

ÔÇ£I went into a panic attack and had a big adrenaline rush as well. It was so bad that I had to stop for a few seconds to recover and by then it was all over for me.

ÔÇ£You don’t get any second chances at a World Championship. If you miss the lead group, you have to play catch-up for the rest of the race. For a moment I considered quitting, but I am glad I did not. I had to prove to myself that I could overcome a setback in an important race.

ÔÇ£I really hammered the cycling, but it was to no avail.┬á I just could not catch up with the leaders.

ÔÇ£My energy levels were quite low when I started the run, but I forced myself to dig deep for one last big effort. It paid off, because I managed to pass quite a few athletes on the run. I was really disappointed afterwards.┬á I could not help wondering why I had to have such bad luck in the one race that really mattered.

ÔÇ£But the fact that I continued to fight until the finish was definitely a mental victory for me.ÔÇØ

Sullwald will now compete at a World Cup event in Mexico on 6 October before taking a well-deserved break. 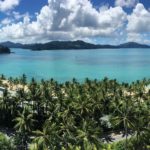 SA Olympians in Super numbers game Down Under

Steyn’s the one to watch

By GARY LEMKE in Tokyo On the third day of staying in the Paralympic village bubble “it” finally dawned on me. “It” wasn’t the sheer visual aspect of the 4 000-plus Paralympians with disabilities all in the same environment of towering 17-storey apartments and surrounded by a 4km perimeter fence. Admittedly, that is the initial and most common conclusion of… END_OF_DOCUMENT_TOKEN_TO_BE_REPLACED