And it was Paralympic legend Natalie du Toit who won the team’s third gold medal (and her 12th Paralympic gold medal in total) when she won the S9 400-metre freestyle event, the race she has always decided as her “safe banker” event.

The other medal went to Shireen Sapiro in the S10 100m backstroke (bronze) while the in-form Charl Bouwer was unable to medal in the S13 400m freestyle, ending fifth in 4min 14.14sec.

Leading by 2.24 seconds after 100m already Du Toit went on to win in 4min 30.18sec two seconds quicker than her morning heat and later in the evening the South African national anthem sounded around the Aquatic Centre for the third time at these Games.

Her victory margin over Britain’s Stephanie Millward was almost 10 seconds. After the race an emotional Du Toit dedicated the race to the late Central Gauteng swimming president Cathy Doyle who passed away recently.

“She was supposed to be here officiating and I can still picture her on the chair at the last World Championships so I used that image to psyche myself up a bit more today.

“I’m definitely more comfortable in the longer distances and luckily I have the ability to keep the same pace over distance no matter how tired I am.”

But Wednesday will be another story as she now turns her attention to her shortest discipline, the 50m freestyle.

“That race is over in the blink of an eye and with me not having the greatest of starts┬á it is difficult but anything can happen. I haven’t been under 30 seconds for a while now so that will be my aim and then we’ll just see.”

Du Toit also said that the awareness that her Paralympic, indeed her swimming career, is coming to a close.

“It’s starting to hit home now that I only have three races left now and hopefully I won’t get too sad when I get there.”

Swimming in the same race, was Du Toit’s team-mate Emily Gray, who was slowest into the final but secured seventh in 4:59.77. “I wanted a PB and tried my hardest but it just wasn’t to be. The experience I have gained here already though, having swum two heats and two finals, is something else and I am going to use all of this to carry me forward to Rio.

“The main thing I’ve learnt outside the pool is how to deal with the pressure of the call room which is very important.”

Moving on to Sapiro and she was philosphical about winning bronze in 1:09:02 as the defending Paralympic S10 100m backstroke┬á champion. “The pressure over the last four years has been incredible and I’m so glad it’s off. Obviously I’d have liked to win gold but I gave it my best shot and I have to be happy especially as it’s also a personal best.

“The standard of competition has raised so much in the last four years it’s incredible. When I touched I knew I had medalled which was great and it was also great to have what seemed like half the grandstand filled with my extended family.”

She still has two more events to go before her 2012 Paralympics are done. And how will she celebrate it?

“I know already,” she laughed. “I’m going to treat myself to a McFlurry from McDonalds. I don’t often have fast food like that but this time I have just promised myself that little reward.”

Bouwer wrapped up the evening with his fifth behind the bulldozing Belarussian Ihar Boki, the man who has now denied him gold on three occasions already in these championships and who set yet another world record on Tuesday night.

He has won a gold and two silvers at the Championships and still has two more events to swim before the Games wrap up on Sunday.

The last place you’ll find him for the next two days is near a pool… he’s now enjoying a two-day break before his penultimate race on Friday. 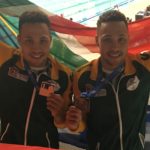 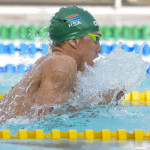 Nine medals for SA on day one of African Champs

By GARY LEMKE in Tokyo On the third day of staying in the Paralympic village bubble “it” finally dawned on me. “It” wasn’t the sheer visual aspect of the 4 000-plus Paralympians with disabilities all in the same environment of towering 17-storey apartments and surrounded by a 4km perimeter fence. Admittedly, that is the initial and most common conclusion of… END_OF_DOCUMENT_TOKEN_TO_BE_REPLACED