The new Omega ‘track-start’ blocks will be used at the Duel in the Pool between Australia and Japan on May 9-10. If the blocks make any difference at all, they will not make anywhere near the kind of difference that has been made by suits, nor, of course, will they increase swimming speed.

AIS head swimming coach Shannon Rollason put the difference at a tenth of a second. A one-off tenth of a second, of course, so if anyone gains relatively more than most it will be the 50m sprinters.

‘I would not be surprised by up to a tenth of a second of a better start because you can really use your back foot,’ Rollason told AAP. ‘It is going to take a little while for swimmers to get used to them.’

The blocks have been installed at the AIS in readiness for a time after Rome 2009 when they will become ‘standard’ in the race pool. FINA voted to reject the blocks for use in Rome on the grounds that not enough of them had been distributed, which had meant that relatively few swimmers had had time to practice in them (not that that made a difference when the LZR was launched, of course). 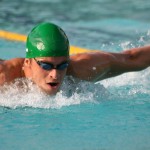 No progress for SA in 200m breaststroke heats at World Champs

By GARY LEMKE in Tokyo On the third day of staying in the Paralympic village bubble “it” finally dawned on me. “It” wasn’t the sheer visual aspect of the 4 000-plus Paralympians with disabilities all in the same environment of towering 17-storey apartments and surrounded by a 4km perimeter fence. Admittedly, that is the initial and most common conclusion of… END_OF_DOCUMENT_TOKEN_TO_BE_REPLACED