Star gymnast Nicole Szabo is back home in South Africa after a rollercoaster first year of college and competition in Chicago, United States.

Szabo, was in her first year of studies.

And the Johannesburg teenager, 19, has done an excellent job of balancing studies and sport and her family can be justly proud of just what she’s achieved in her first of four years.

Studying for a major in kinesiology at the University of Illinois in Chicago, Szabo, pictured in action here, leapt into class and sports activities with great gusto and has achieved on both the brain and brawn fronts.

“I competed at every meet during the season, was named Midwest Independent Conference Specialist of the Week when I posted a personal-best of 9.825 and first-place finish at a meet on bars while also collecting a career-best score of 9.750 on floor,” shed told Road to Rio 2016. “I also scored a career-high of 9.600 on beam. I then finished out the season with a score of 9.800 on bars at the MIC Championships.”

And on the academic front, it was just as good as news.

“As a freshman I was part of the All-State and All-Conference Academic Team member having a Grade Point Average (GPA) of 3.25 or higher. And after the second semester, I achieved the Scholastic All-American honoree ÔÇô having an average of 3.5 GPA or higher in a school year (both semesters of freshman year). I had an average of 3.6 ÔÇô this is the highest academic achievement that a student athlete can receive.”

On her all-round experience she says “it was a completely different experience to high school. There’s so much more freedom since no-one is there to tell me to go to class, what to eat or when to go to bed and so much discipline is involved being away from home.

“I had to adjust to the cultural differences, the American food, the different teaching and learning methods ÔÇô all the homework and announcements that were online and of course the different dialects that are used in Chicago. At first it was really hard to adjust being so far away from home and coming from a loving family, but being on a gymnastics team allowed me to make friends automatically who guided me through freshman year and was there for me everyday throughout the semesters.”

Understandably, Szabo says that competing every weekend for three months is tough on the body. “But those meets are incredibly fun because you go out there and compete for your team, not just for yourself.

“And so hitting routines makes it that much more fun because I am able to share it with my team and the other student athletes who come out and support us. Being a student athlete on a gymnastics team is an incredible opportunity, because not only does it look good, but I now also have a family away from home.

“Freshman year was an awesome experience and I cannot wait to see what the next three years have in store for me. 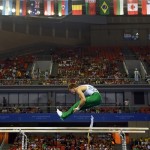 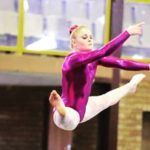