The Pescodia-based Shidokwon Academy of which they are members, is an affiliate of the South African Taekwondo Federation (SATF) which endorsed their participation in the virtual international Taekwondo championship.

‘We send in video clips of a minute-and-a-half lengths. These videos were of two formats of Taekwondo styles, namely, the Poomsae team as well as Poomsae Pair entries.

‘We sent these videos ahead of the competition which was scheduled for 29 and 30 August 2020,’ said Kok.

The Taekwondo tournament was organised by the Indian National Federation (IDSO Cup). They were supported and assisted by the Kukkiwon World Taekwondo headquarters, which is based in South Korea.

The top contending countries that took part in the tournament featured the best, including former world champions.

Kok said that the Shidokwon Academy was part of an illustrious group from South Africa.

‘We from the Shidokwon Academy were part of the 22 South African athletes of whom three were nominated from our own academy in the Northern Cape.’

Kok said Jaydean and Donica made it through to the finals of the championship.

‘They certainly represented not only our province but South Africa on this international platform, achieving gold and bronze medals, respectively,’ he said.

‘I am so proud of all the SA athletes that entered and participated,’ Kok told the Diamond Field Advertiser.

‘This achievement gives us a clear indication of our national as well as international standards.

‘We have been doing a lot of online interventions to keep our athletes on par and active while we ride out the Covid-19 pandemic at home.

‘This, so far, is the highlight of the year. I am hoping for more positive outcomes as we prepare for many more competitions including preparing ourselves to take part in the upcoming Olympics next year in Tokyo as our sport code is an Olympic sport,’ Kok added.

Duncan still dreams of being on 2012 podium 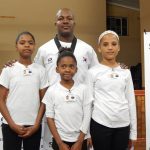 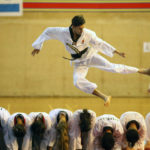