Our national men’s hockey side had a rude wake-up call in their opening game of the BDO Champions Challenge tournament in Salta, Argentina, Sunday, going down 6-2 to the host country.

Argentina started in fine fashion and ended the first half 4-1 to the good. South Africa fought back well in the second half, scoring another goal but also conceding two more.

Said captain Austin Smith: “It was a disappointing start to the tournament, and certainly a 3-3 or 4-3 in favour of the Argentinians would have been a fairer reflection of the game. I know you can’t blame the umpires, but big moments affect the game and it certainly did today.

Before the game the team had to sing the natioanal anthem without any backing and one could say the team never got back on song thereafter.

“The home crowd was smaller than expected due to the rainy weather which had been around all day. The rain made playing conditions tricky and the ball was running very slowly, hampering both teams’ movement of the ball,” said Smith.

“Argentina started the stronger and used their circle entries well. We defended their corners superbly well though, and things could have been entirely different had we been awarded penalty corners of our own at the opposite end. Instead the decisions went against us and it was Argentina who were awarded a penalty stroke for a tackle which was contentiously on the circle line.

“Pedro Ibarra, Argentina’s corner specialist put it away, only minutes after he had finally converted a penalty corner. We replied shortly after with a goal from Marvin Harper, who battled through defenders and finished off his movement to score our opening goal for the tournament in fine fashion.”

South Africa improved in the second half and Smith said: “We played superbly for large patches, hitting the cross bar, entering the 23ÔÇØ on a number of occasions after some well worked moves but disappointingly nothing came from it.┬á Argentina fed off out mistakes, and scored another two goals purely from our errors. Despite the harsh 6-1 score line we fought tirelessly to restore some pride. Our efforts were rewarded late in the game with Lloyd Norris-Jones the scorer.

“Certainly a 3-3 or 4-3 in favour of the Argentineans would have been a fairer reflection of the game.”

South Africa now take on Canada in their second group game on Tuesday. This after Canada lost narrowly to Pakistan (2-1) in their group game. “We know this team well and I am certain that if we produce a performance like we did today with a few less errors we will earn ourselves a favourable result.”

In the other pool, New Zealand drew with India 2-2, and a young Belgian side scored a late winner to beat China 4-3. 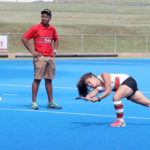 Zondi looking to continue the winning culture at Tuks