There were five different codes being represented by Team South Africa on Tuesday. Here is a list of how South Africans in competition fared.

FOOTBALL
Women’s First Round, Group E: South Africa drew 0-0 with Brazil
In a nutshell: They had pride to play for in their final group match and they can be proud that they held the usually free-scoring host nation scoreless in Manaus. But, and it’s a big but, where are the goals going to come from? South Africa failed to score once in their three matches: 0-1 against Sweden and 0-2 to China and now 0-0 to Brazil. In London four years ago it was just Portia Modise’s freak strike that put Banyana Banyana on the goals-for column in three matches and SA are seriously going to need to find a strikeforce out there somewhere. ME

ROWING
Men’s Pair: Lawrence Brittain and Shaun Keeling qualified for the final by finishing third in their semi-final in 6min 27.59sec.
In a nutshell: Six boats squared off in two semi-finals. The selection criteria was simple – the first three in each semi progressed to the ‘A’ final and the other three went to the ‘B’ final.  Brittain and Keeling got off to a fast start through the first 300m before being joined by favourites New Zealand in lane four. The Olympic and world champions, with a stroke rate of 40, compared to the 38 of the South Africans, put their noses in front at the 500m mark and weren’t to beheaded again. Brittain and Keeling were alone in second and Great Britain – the country, not individual – pulled into third going through halfway. These three boats had put daylight between them and the rest of the field and qualified comfortably, with New Zealand looking every inch the gold medal favourites they are. South Africa were touched off by GBR for second but kept the rest of the chasers away. GL
What they said: ‘It was probably the best weather we’ve had so far, said Brittain. ‘Overall, a good race by us. Our first three-quarters were good but the last quarter wasn’t as good. But the main thing was to get into that final. Sitting at the back of the boat I get the chance to watch the other crews so I could see we were doing the job well enough. But there’s still work to be done for that final.  Keeling added his thoughts on the victorious winners of their semi, Kiwi gold medal favourites Murray and Bond. ‘These guys haven’t been beaten in nine years but in an Olympic final anything can happen. All we can do is go for the best race we can and if we produce that I’d like to think we have a shot.’ ME

Men’s Four Repechage 1: David Hunt, Jonathan Smith, Vincent Breet and Jake Green made amends for their under-par performance on Monday with victory in their repechage to progress to the semi-finals.
In a nutshell: South Africa were never headed as they pulled Belarus and Russia along. It was a comfortable win for the Four who weren’t happy with their effort on Monday, but who were determined to put things right having been given a second chance of qualifying through the back door. They won in 6:34.97 and will now have their sights and minds focused on the semi-finals. GL
What they said: Hunt is confident the crew have moved on from their below-par performance in Mondays’ heat. ‘I think yesterday was probably just down to a bit of inexperience. We normally have a good start and it seemed we almost doubted our own lead and as though we just sat waiting. But today we wanted to contest and aggressive and fastest. I thought we really had a ruthless  middle sector.’ ME

RUGBY SEVENS
Men’s Pool B: South Africa were untroubled Spain in their game against tournament minnows, winning 24-0.
In a nutshell: The game had come immediately after France produced an upset to beat fellow Pool B rivals Australia 29-14. But there was to be no repeat as South Africa immediately went on the front foot, scoring through Cecil Africa to be 7-0 up after 90 seconds. That became 14-0 at half-time (Africa with another converted try) before second half tries by Seabelo Senatla and Philip Snyman made the final score 24-0 at the Deodora Stadium. GL

Men’s Pool B: For the second match in a row, South Africa kept a clean sheet while going over for four tries as they earned a 26-0 win over France to add to their 24-0 victory over Spain earlier.
In a nutshell: South Africa were strong on attack and result in defence as they kept their opposition trills – and in truth, France never came close to scoring. For South Africa, tries were scored by Justin Geduld, Kwagga Smith, Kyle Brown and Dylan Sage, while Cecil Afrika converted three of them. GL

SAILING
Laser Men: Stefano Marcia
In a nutshell: Marcia ended 42nd out of 46 starter in his third race, sailed in winds of between 10-14 knots. That will come as something of a disappointment after his 30th and 25th spots on the opening day of competition. That saw him dropping from 28th to 34th in the overall fleet standings with 97 points. His second race saw a slight improvement though as he ended 39th but his overall standing is now 36th. Meanwhile up front it’s Argentinian Julio Lsogaray who has moved into the lead on 21 points, replacing Croatia’s Tonci Stipanovic. ME

SWIMMING
Men’s Breaststroke Heats: Jarred Crous finished eighth in his heat in 2:12.64 and and 25th overall and failed to qualify for the semi-finals. Cameron van der Burgh finished seventh in his heat in 2:12.67 and 26th overall and failed to qualify for the semi-finals.
In a nutshell: Olympic 100m silver medallist Cameron van der Burgh showed up well for the first 100m, but after that he had what he calls ‘problems with my stroke’ and he knew from a  long way out that he wasn’t going to be a factor in this longer event. He’d been looking for a 2:10, but it was not going to happen on the day. Yet, he still needed the ‘racing experience’ and has something to go back and work on. What Van der Burgh hadn’t said in the lead-up to these Games is that he picked up a bad virus in Europe at a crucial time of preparation and it required two sets of antibiotics to be treated. With that in mind his heroics in the 100m, where he held off a wall of challengers, pulling on a steely mental resolve, should not be underestimated. A few days later, that silver can feel like a gold. Crous, who came into the competition with a 2:10.80, will be disappointed that he wasn’t able to replicate that on this stage. A 2:11.25 would have been good enough to make the list of 16 semi-finalists. GL
Men’s 4x200m Freestyle: South Africa, with a quartet of Myles Brown, Sebastien Rousseau, Calvin Justus and Dylan Bosch finished fifth behind the United States, timing 7:12.61 in their heat. Brown, who’d set a new 400m national record at the weekend, produced a 1:46.47 first 200m, to carry South Africa into the lead. Rousseau’s leg was 1:48.35, Justus 1:49.04 and Bosch 1:48.75 as South Africa qualified 11th out of 16 and failed to make the final.

Men’s 200m Butterfly: Chad le Clos finished out of the medals, in fourth, as Michael Phelps won the 20th gold medal of his Olympic career. 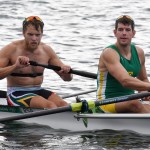 How Team SA fared on Thursday 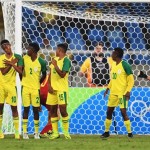 Pauw gutted but still proud as Banyana fail to go through 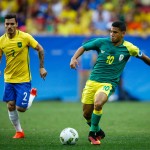