As the start of The Unlimited Dusi 2013 inches ever closer, the dark horse to watch in the ladies racing will most certainly be Olympic paddler Jen Theron.

Although born and raised in KwaZulu-Natal, the home of the Dusi, Theron is currently living and training in Johannesburg. She is best known her flatwater paddling prowess ÔÇô having raced both the women’s K1 500-metre, and the K4 A final at the 2008 Beijing Olympic Games under her maiden name Jen Hodson, and having won the last edition of the tough Berg River Canoe Marathon in very impressive style.

What is often overlooked, however, is that Theron has also won the last two Lowveld Crocs ÔÇô a race that is run on possibly the most technical section of river that is raced in South Africa.

Although Theron is no stranger to the Dusi podium, having placed third with Hilary Pitchford back in 2010, she is the first to underplay her chances. ÔÇ£My best result so far in the Dusi Canoe Marathon is third in a K2 with Hilary ÔÇô but that was mostly thanks to her skills and knowledge! We shot both Tops Needle and Island ÔÇô what a rush!ÔÇØ

Despite her modesty, Theron has already proved that she will most certainly be in the running for the Dusi podium after placing third in the Best 4 Healthcare 50 Miler in early December. Theron was only 12 minutes behind the in-form Robyn Kime and Abby Adie at the end of the two day race. However, in comparison to the Dusi Canoe Marathon, the 50 Miler is a paddlers’ race ÔÇô a format which Theron claims suits her more, with running being her weakness.

ÔÇ£I battle on the first day of the Dusi as my running is so weak, but even worse than that, the running really takes it out of me so I am really tired when I get back in my boat to paddle.
ÔÇ£I am going to have to use my strengths ÔÇô paddling on deeper sections like the dam and into the finish on Day Three to make up for time lost on the portagesÔÇØ.

Theron is married to stalwart Gauteng racer Jacques Theron, who has been a consistent presence in the Dusi men’s top 10 for more than a decade, and has added a new dimension to his wife’s training regime.

What she might think she lacks in running ability, Theron certainly makes up for in enthusiasm for the race ÔÇô and this will stand her in good stead come The Unlimited Dusi 2013. ÔÇ¿ÔÇ¿ÔÇ£My Dusi highlights over the years have been paddling with my Dad, and my sister Linda. In fact I can’t think of anything I don’t like ÔÇô it’s just awesome out there!ÔÇØÔÇ¿ÔÇ¿Competitors line up for the start of The Unlimited Dusi on 14 February at Camps Drift, and ends in Durban on 16 February. 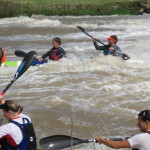 Former world champ to take on the Fish River Marathon

Tokyo looms, again, We don’t know for sure in what shape of form the Olympics and Paralympics will take place in July to September and if anything 2020 taught us to take nothing for granted. What we do know is that if Tokyo 2020 +1 does go ahead, it will do so against a new-found back drop where simply taking… END_OF_DOCUMENT_TOKEN_TO_BE_REPLACED