Time trial competitors can take comfort in knowing that there will be full road closure on the N4 during the individual TT event on Thursday, courtesy of subsidiary sponsor Trans African Concessions (TRAC), who manages the N4 toll route between Pretoria and Mozambique. With the road race not taking part on the N4, there will be rolling road closure for the team TT on Friday and the road races on Saturday and Sunday.

ÔÇ£We are expecting about 120 riders for the time trial on Thursday,ÔÇØ said Cycling SA road director Hendrik Wagener. ÔÇ£The women’s race starts early on Saturday morning, with the men racing on Sunday morning ÔÇô both routes begin at the Mbombela Stadium in Nelspruit, and go out to White River and back to Nelspruit again, with the elite women completing two laps and the elite men three.ÔÇØ

Wagener was pleased to announce that Olympian Daryl Impey, who races for the professional Orica-GreenEdge team will be participating, as well as pro continental team riders from MTN-Qhubeka and Team Bonitas such as Jay Thomson, Jaco Venter, Louis Meintjes (all MTN-Qhubeka), Christopher Jennings, Songezo Jim and Richard Baxter (Bonitas), Nolan Hoffman (Tasol-GT) as well as representation from our Top Clubs such as Europcar, amongst others.

The women’s field will see Olympian Ashleigh Moolman-Pasio compete to defend her title against the likes of Lise Olivier and Leandri du Toit, with Heidi Dalton and Monique Gerber set to head the junior women onslaught.

ÔÇ£We are proud to welcome Clover as a title sponsor for this year’s national championship event, which makes it possible for us to put on an event of a very high standard,ÔÇØ said Wagener. Europcar, who have been instrumental with their sponsorship of vehicles for the past two years, supply vehicles for the Cycling SA commissaries in order to follow the race as it unfolds.

The registration venue is at the Protea Hotel Nelspruit, and registration and number collection takes place on Wednesday from 2-6pm. 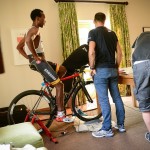 Evans and Moolman up for the challenge

Tokyo looms, again, We don’t know for sure in what shape of form the Olympics and Paralympics will take place in July to September and if anything 2020 taught us to take nothing for granted. What we do know is that if Tokyo 2020 +1 does go ahead, it will do so against a new-found back drop where simply taking… END_OF_DOCUMENT_TOKEN_TO_BE_REPLACED