The United States based Townsend made up for the disappointment from the first day when he fell short of a podium spot in the 100-metre freestyle.

Sapa reports that the three-time Olympian raced to victory in the 200m individual medley in a time of one minute 54.25 seconds (1:54.25).

Earlier, Townsend finished second, along with Australia’s Robert Hurley in the 200m freestyle with matching times of 1:43.50.

The duo were beaten to the wall by Tomasso D’Orsogna of Australia with a time of 1:43.20. 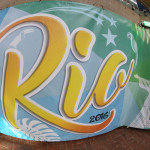 Jessica gets more gold for SA

By GARY LEMKE in Tokyo On the third day of staying in the Paralympic village bubble “it” finally dawned on me. “It” wasn’t the sheer visual aspect of the 4 000-plus Paralympians with disabilities all in the same environment of towering 17-storey apartments and surrounded by a 4km perimeter fence. Admittedly, that is the initial and most common conclusion of… END_OF_DOCUMENT_TOKEN_TO_BE_REPLACED