Not only has the three-time race winner shed five or six kilograms, and returned to what has been described by his team manager Malcolm Lange as ‘great form’, but he has the backing of a potent Team BCX squad packed with cyclists who know what it takes to get riders on the podium at the Tour Durban.

Hoffman will have the support of David Maree, who finished second in this race in 2014 and 2016, and the 2014 champion Reynard Butler, with other teammates Wesley Eslick, Steven van Heerden and Calvin Beneke ready to provide experienced backup, or even take up the fight in a breakaway if needed.

Both Hoffman and Butler have been part of South African teams in previous African Games, the former in Mozambique in 2011, and the latter in the Congo two years ago.

Hoffman has a stunning pedigree, which features a World Championship silver medal on the track and a list of palmares that few South African cyclists can come close to matching, but past performances count for nothing if current form is not there, and ‘The Hoff’ has proven recently that he is in peak condition.

He celebrated his 32nd birthday with his first win at the Emperors Palace Classic in Kempton Park last weekend to add to the Herald Cycle Tour win earlier this year. And on the track over the past few weeks the sprint specialist has shown there is nothing wrong with his speed as he added three gold medals to his impressive collection of South African Championship titles and two wins at the African Continental Championships.

At the South African Track Champs his back-up was also in impressive form with a total of five wins going to the BCX squad.

The strength of Hoffman and his teammates will make for some interesting tactics on Sunday, as the other riders will be wary of expending too much energy trying to create a break, knowing that the powerful BCX squad has the ability to chase down most breakaways.

This could result in some negative tactics with the bunch ‘ganging up’ on the BCX crew, something which frustrates Lange, but which he takes as a compliment.

‘This season we have seen a lot of negative racing from the other guys in the peloton,’ said the experienced former pro. ‘But I guess it is a compliment that they always see us as the team to beat.’

Despite having Bradley Potgieter as the defending champion, the RoadCover team are not bringing a full squad to the aQuellé Tour Durban, and will be relying heavily on mountain-biker-turned-road-rider Brendon Davids and Willie Smit to support Potgieter in his quest to defend his title.

But Davids and Smit are coming straight from the Old Mutual joBerg2c mountain bike event which finishes on Saturday, and there will be a big question mark how fresh they will be after nine days of mountain biking.

Davids has been in great form on the road this year, and said earlier he was not worried, as he often comes out of a long stage race in better form than when he went in, and with the final day of the joBerg2c a neutralised soft-pedal to the finish, the duo could be in a strong position to provide the support Potgieter needs to get to the line first.

The 19-year-old Harris is a Durban local and with lots of home-town support lining the roads at the finish at Moses Mabhida on Sunday it could spur him on to go one better this weekend and edge out Hoffman in the final dash for the line.

The main 105km road race will start from Moses Mabhida Stadium at 6.30am, with the leaders expected to return to the stadium at about 8.45am. The 55km cyclocross event will start at 9am and the 45km fun ride will set off at 9.15am. 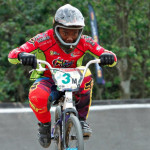 BMX aces looking to tear up the track at World Championships

Tokyo looms, again, We don’t know for sure in what shape of form the Olympics and Paralympics will take place in July to September and if anything 2020 taught us to take nothing for granted. What we do know is that if Tokyo 2020 +1 does go ahead, it will do so against a new-found back drop where simply taking… END_OF_DOCUMENT_TOKEN_TO_BE_REPLACED