The South African Under-20 women’s national soccer team raced through to the third and final round of qualifiers for the 2016 Papua New Guinea FIFA Women’s World Cup on Saturday.
That after Basetsana beat Zambia 3-2 in a hard-fought battle played in scorching heat at the Makhulong Stadium in Tembisa.
The first leg ending goalless two weeks ago in Zambia, so the pressure was on South Africa, as any goal by the visitors would make it a mountain to climb for the hosts.
Basetsana started brightly though, scoring just under 20 seconds into the match through Linda Motlhalo to ease the pressure.
The home side could have gone to the break with more goals on the score sheet, but Thembi Kgatlana rushed her shot when she was facing the opposition keeper, while Motlhalo also shot wide with the net at her mercy.
Zambia also had their chances too but Mapaseka Mpuru was alert in the South African goals to deny them.
After the restart, the visitors silenced the home crowd when captain Barbra Banda found the equaliser with a cool finish past Mpuru – meaning South Africa had to score two to advance.
But Mosili Makhoali, who was a thorn in the Zambian defence, together with Kgatlana and Motlhalo, restored Basetsana’s lead in the 56th minute. Makhoali also starred for South Africa at the Africa Region 5 Games in Zimbabwe late last year.
The celebrations had hardly died down when second half substitute, Agnes Musesa made it 2-2 two minutes later.
Motlhalo was back in the thick of things to hand the lead back to Basetsana with a well-taken goal in the 73rd minute – leading to a nerve-wrecking final minutes for South Africa.
But although Zambia tried to attack, Basetsana were resolute in defence to protect their lead and it ended 3-2 to the hosts much to the delight of home crowd who backed the girls all the way.
The win was sweet revenge for South Africa as Zambia edged them out of the 2015 FIFA U17 Women’s World Cup qualifiers, which were held in New Zealand.
Basetsana now face Nigeria (who defeated RD Congo) in the third and final round in two weeks time.
The first leg will be played on the weekend of 23-25 October with the return match scheduled for 6-8 November.
The 2016 FIFA U-20 Women’s World Cup will be the eighth edition of the FIFA U-20 Women’s World Cup, and will be held in Papua New Guinea. A total of 16 teams qualify for the final tournament – two from the African continent. 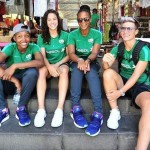 Ellis urges Banyana players to show off their talents 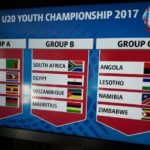