It’s not exactly been local road running’s best kept secret but Irvette van Blerk will definitely be lining up for her first crack at the 42.2-kilometre distance when she lines up for the Soweto Marathon on Sunday.

And it’s a journey that will hopefully be destined to take her to London next year and the 2012 Olympic Games.

“I was trying to keep it low-key but it looks like everyone knows now,” laughed the Krugersdorp athlete on Friday. “I’ve taken some flack for running the marathon but I’m taking it from whence it comes. Yes, it’s a big step but I’ve been putting it off for two years now and I believe that now is the time to move up to the marathon distance.”

Not that that much is a huge secret. As she said in a Road to London 2012 magazine feature early in 2010 her goal was to run the marathon at the 2012 games.

Now 24, the multiple SA road champion is showing remarkable maturity ahead of Sunday’s race and is not making any bold or brash predictions of race time or position. “I’m actually more scared than excited right now. I’m just looking to break the ice and then become more focused on the marathon in future. And I’m sure it’s going to make me much stronger mentally going forward, so why not. You only live once so I really see it as both an opportunity and as a good long run.”

Certainly Van Blerk has all the potential to shine at the longer distance. She has a half-marathon best of 70min 56sec run in New York earlier this year and regularly runs lengthy distances in training. What she’ll need to do is to nurse her body over the distance and make sure she watches any little injury niggles.

“In terms of game plan there’s nothing special. I’ll try and run with the leading ladies and then just see how it goes from there as the race unwinds. I want to try and run comfortably and just enjoy the first experience.”

That’s diametrically opposed to Russia’s Nina Podnebesnova who said straight out: ÔÇ£I’m coming here to break the record,ÔÇØ when she announced her intention to run on Sunday. She has a personal best of 2:31:38 when finishing third at the national championships in Moscow last year.

She also ran the Old Mutual Two Oceans ultra-marathon in Cape Town earlier this year where the 31-year-old ended fifth (3:43.56) in her Oceans debut.

The Soweto Marathon record belongs to Van Blerk’s training partner, Rene Kalmer who ran 2:43.54 in what was also her marathon debut.

The race will be broadcast live between 6-11am on Sunday on SABC 2.

April and Maxwell burn up the German roads 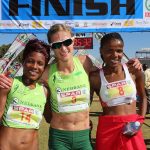