Van Dyk, who was in the vicinity of the explosions that killed three people, spent a shell-shocked few days in the aftermath of the race but took time out to take Road to Rio 2016 through his Boston experience.

“I felt good in the days leading up to the race and I was hitting the right speeds so my taper worked out well. Race day was chilly was a slight headwind. I was a bit surprised when I was only given the second row on the grid as we lined up.

“Most of the top guys besides Cassidy and Furnley got the second row. Boston has a controlled start whereby they lead us out by lead car for the first 800m but being in the second row was a bit messy. They also just about stopped us dead before letting us go.

“The guys in the front row got a jump and it took me a good 2km to catch up and get into the race. Usually I would have used my advantage on the down hills to get away from the back but this time I used it to catch up.

“At some point Yamamoto came past us from behind. He is using a chair built by Honda out of carbon fibre. The chair is commericially available to us at $25 000 which none of us can afford. Going into the headwind it was clear that his chair was putting him at an advantage.

“The chase pack ended up being myself, Cassidy (last years winner), Hug (Paralympic silver medalist), Kota (three times third in Bosotn) and a new comer from Spain. We all took turns setting the pace to chase down but could not close the gap. Cassidy and the Spanish guy dropped off just before the mid point.

“The gap remained between 20-30 seconds as we would make up ground on him on the hills but as soon as he hit a down hill or a flat he pulled away from us. At around 30k we hit the Newton Hills and I knew it was now or never to catch him. I pushed the pace very hard and Hug dropped off, not being able to keep up.

“At the top of heartbreak Hill I came within 15 seconds of Yamamoto but again as soon as we hit the flat he pulled away from us. At this stage it was only Kota left with me and he was having a hard time. With about 3km to go it became clear that we were not going to catch him and we started resting a little for the sprint for second and third that was going to come.┬áWith around 600m to go I took the lead in the sprint and was able to sprint away from him and take second place.

Summing up ahed of London: “Given the circumstances I’m really pleased with my performance as I was able to out race some very big names from the London Paralympics where I did not race in the marathon.

“London is once again going to be a very competitive field and I look forward to testing myself against the best in the world once again. 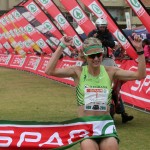 Bailey, Brimble to the fore in the forest at AfricanX

By GARY LEMKE in Tokyo On the third day of staying in the Paralympic village bubble “it” finally dawned on me. “It” wasn’t the sheer visual aspect of the 4 000-plus Paralympians with disabilities all in the same environment of towering 17-storey apartments and surrounded by a 4km perimeter fence. Admittedly, that is the initial and most common conclusion of… END_OF_DOCUMENT_TOKEN_TO_BE_REPLACED