Patience and perseverance go hand in hand… or so it has proven to be for Ernst van Dyk as he rode to gold in the men’s H5 event at the UCI Para-Cycling Road World Championships in Greensville, South Carolina.
Van Dyk returned to his Boland base of Paarl this week with not only a gold and silver (for the time trial) medal but also with the honour of wearing the rainbow jersey for road events for the next year. This is reward for him being crowned 2014 world road champion.
The men’s race was contested over six laps for a total of 61.2 kilometres and at an average speed of 35.63kph and as is often the case, was a closely run thing.
Less than a second separated Van Dyk and arch-rival Alex Zanardi of Italy after 1hr 43min 03sec of frantic racing. Tim de Vries of the Netherlands was three seconds adrift in the bronze medal position.
Former Formula One racer Zanardi took the world by storm with his custom-built bike that carried him to gold at the London Paralympics in 2012 and Van Dyk and his team have been playing catch-up ever since.
‘It’s been three years since I last won the rainbow jersey‎ so I’m really happy that all the hard work and investment finally paid off,’ Van Dyk tells Road to Rio 2016. ‘We have been at the drawing board since 2012. Now it has finally paid off but it did not come easy.’
Van Dyk was up against it from the gun. ‘I lost my water bottle in the first kilometre on some rough road surface and we were only allowed to feed on lap two. The feed zone was towards the end of lap two so I ended up doing around 18km at high tempo with no water in extreme heat and humidity.
‘I stayed calm and just focused on not exerting myself too much over those first two laps. When I finally got some water I still hung back and just focused on rehydrating.’
The conservative approach soon paid off though. ‘With around two laps to go I felt good and I started moving up in the bunch and keeping an eye on breakaway attempts. Conditions were however so severe than no-one could really have the confidence to just go off the front.’
Sooner or later thought the pressure would tell and with 3km to go Australia’s Stuart Tripp made a run for it. ‘But he is not really a good climber and with a little 16% hill in the last kilo I knew we would get him,’ says Van Dyk. ‘I used Oz Sanchez’  [fifth eventually) draft to sling-shot past the Aussie and take the lead with 900 metres to go.’
It was at this stage that more evidence was seen of all the hard work put in by Team Van Dyk. ‘During the past three months we had focused a lot on my explosive strength in the gym and on the road. It was pretty hard getting up at 5am through the cold, wet winter to train and go to gym with strength and ‎conditioning specialist Sean Surmon but the effort paid off as we were able to increase my strength significantly.
‘We also did a lot of hard intervals with coach Ricky Kulsen pushing me from his scooter during our road sessions. My Sunday group rides with Kroft Cycles in Paarl was almost like having an intense race every Sunday and the guys pushed me to my limits.
‘In the end it all came together in that last 900m. Zanardi pulled up till he was next to me but then I put the hammer down. For a few seconds my watts peaked at 1200 and I got a good jump on him. He never came back at me and I even still had some kick left in the tank.’
Van Dyk went to thank still more parties through their help.
‘I have to thank SASCOC for their continued support through the OPEX Programme and also Cycling South Africa and Para-cycling for giving us the professional support that it takes to compete at this level and JC van der Walt was a fantastic team manager. Then, with the heat we were going to face in Greensville, Velotex (official kit supplier for CSA) developed a special skinsuit for me by using a new fabric called poly-vent. This really helped to keep me cool and aerodynamic in the tough conditions.
‘I now carry the No1 ranking in the world for handcycling and on the athletics side the time as I took my 10th Boston Marathon win is still sitting at No1 on the IPC marathon rankings. It seems this is turning into a dream season by carrying the top world ranking in two sports codes.’ 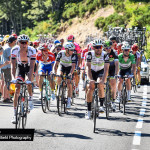 Esterhuzen ends 11th in the sprint at World Championships

By GARY LEMKE in Tokyo On the third day of staying in the Paralympic village bubble “it” finally dawned on me. “It” wasn’t the sheer visual aspect of the 4 000-plus Paralympians with disabilities all in the same environment of towering 17-storey apartments and surrounded by a 4km perimeter fence. Admittedly, that is the initial and most common conclusion of… END_OF_DOCUMENT_TOKEN_TO_BE_REPLACED