South Africans raced to a second and 13th spot at Monday’s Boston Marathon, writes Mark Etheridge.
Paralympic legend Ernst van Dyk ended as runner-up in the wheelchair title, clocking 1hr 36min 27sec, just a minute ahead of Japan’s Masazumi Soejima for the 42.2-kilometre classic.
They were both streets behind winner Marcel Hug of Switzerland who won in 1:29:53 for his first Boston Marathon.
In the men’s race Lusapho April’s 2:16:25 earned him 13th spot after he had ended 15th in last year’s race. Race winner was Lelisa Desisa of Ethiopia in 2:09:17.
It was Van Dyk’s 16th Boston and he was aiming to improve on his 10 previous victories. But he quickly realised that Monday wasn’t going to be his day. ‘At some point we tried chasing Marcel, but it quickly became evident we weren’t going to catch him,’ Van Dyk told the Boston Globe.
Van Dyk knew Soejima was right there with him the whole way and was hoping he’d outlast him. ‘We come from a track racing background, so we have a special awareness of what’s going on around,’ said Van Dyk. ‘In a sprint, you can just look over your shoulder and you can see what’s happening. We were all hurting quite a lot.’
He later went on to post on social network Twitter: ‘Satisfied with 2nd place in my 16th @jhboston26 today! Conditions were tough and @MarcelEricHug did a great race. Next stop @LondonMarathon.

Cremona through to final at World Indoor Championships 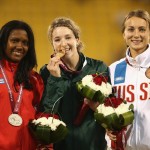 Golden girl Liebenberg leads the way for SA in Qatar

By GARY LEMKE in Tokyo On the third day of staying in the Paralympic village bubble “it” finally dawned on me. “It” wasn’t the sheer visual aspect of the 4 000-plus Paralympians with disabilities all in the same environment of towering 17-storey apartments and surrounded by a 4km perimeter fence. Admittedly, that is the initial and most common conclusion of… END_OF_DOCUMENT_TOKEN_TO_BE_REPLACED