Morne van Wyk and Cameron Delport smashed the world record for the highest limited overs partnership in a top-flight match, laying a solid foundation as the Dolphins secured a 25-run victory over the Knights in their One Day Cup game in Bloemfontein on Friday.
Van Wyk smashed 175 runs off 171 balls and Delport made 169 from 130 deliveries, remaining unbeaten in a remarkable 367-run stand for the first wicket.
The duo hit 129 runs in the last 10 overs, with Van Wyk blasting 82 runs off the last 38 balls he faced.
They improved the previous record for the highest partnership in a list A match held by Sachin Tendulkar and Rahul Dravid, who shared 331 runs for the second wicket for India against New Zealand in Hyderabad in November 1999.
Ghulam Ali and Sohail Jaffar held the previous record for the highest first-wicket stand, making an unbeaten 326 in a Pakistani domestic match in Sialkot in April 2001.
In response, Reeza Hendricks and Rudi Second put up a tremendous fight for the Knights after opener Gerhardt Abrahams fell in the third over.
Hendricks, the top scorer in the match with 181 runs off 135 balls, and Second, who contributed 107 from 124, shared 275 runs for the second wicket.
However, with the hosts looking to bag a stunning victory, seam bowler Robbie Frylinck struck twice in the 44th over, removing both batsmen to take the wind out their sails.
The home side’s middle order was unable to keep up the fight, collapsing under the pressure, as they stumbled to 342 for seven at the end of their 50 overs.
Frylinck returned three for 62 and fellow seamer Rabian Engelbrecht took three for 46 to seal the win.
Hendricks, Van Wyk and Delport scored the fifth, sixth and 11th highest individual innings in list A matches on South African soil. 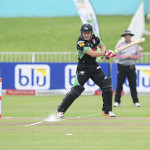 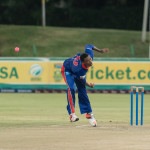