Two of our leading track athletes and near certs for Commonwealth Games selection later this year, are back in South Africa after early season success.

Hurdler LJ van Zyl and Andre Olivier, both 2012 Olympians on Team SA, took part in the IAAF Diamond League action, Van Zyl in Dubai and Olivier in both Dubai and China.

Says Van Zyl, who dipped under 49sec in the 400m hurdles event with his 48.97 clocking: “It just feels so good to be running well again. Now I’m enjoying our wonderful sport all over again.

“Shanghai was a great race for me, even though I only finished fourth.
“It was just the way I ran my race that made me excited and encouraged.”

Next up for Van Zyl are three races in June. “On the eighth I’m running Hengelo, on the 11th its Oslo and then the 14th in New York, all Diamond League events and I’m really looking forward to them.”

“I’ve only now back in touch after lack of communication in China. I’m happy with both my races and getting sub 1:45 is always good.

“Now its back to Potchefstroom, where I’ll stick to basics and then go to Europe again to run in Rome, Hengelo and Ostrava.” 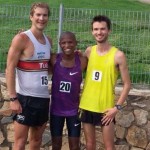 Track best as Shange notches up another walking milestone Down Under

Luvo set to fly in Finland

Another silver for Khotso

By GARY LEMKE in Tokyo On the third day of staying in the Paralympic village bubble “it” finally dawned on me. “It” wasn’t the sheer visual aspect of the 4 000-plus Paralympians with disabilities all in the same environment of towering 17-storey apartments and surrounded by a 4km perimeter fence. Admittedly, that is the initial and most common conclusion of… END_OF_DOCUMENT_TOKEN_TO_BE_REPLACED