‘That was a flipping nice race,’ enthused Van Zyl to Team SA after his race. ‘There were a couple of big names behind me tonight.

‘It’s another sub-50sec finish for me and a nice solid third place.

‘So I’m very happy with my performance, but am also happy to be going home now.

‘I’m definitely going to take a few days off to rest, but then it’s back to training for next year’s Commonwealth Games in Australia.

‘I have no idea what the qualifying criteria are at this stage, but it makes no difference, I’m ready to tackle them.’

Of Van Zyl’s compatriots, 400m flat runner Pieter Conradie took fifth spot in 46.66 as American Gil Roberts got the better of Botswana’s Isaac Makwala to win in 44.94 compared to 45.29.

Long jump action saw another veteran in the shape of Khotso Mokoena. The 2008 Olympic silver medallist leapt 7.64m on the night, which gave him fifth spot behind Russian Aleksandr Menkov (7.98).

The lone SA woman competing was Carina Horn in the 100m dash.

She clocked 11.44, which was good for sixth as Nigeria’s Blessing Okagbare-Ighoteguonor won in 11.14.

In the picture, Van Zyl poses with his competitors at last night’s event.

Another Paralympian athlete is hit by crime 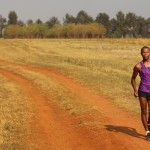 Shange stepping up his game ahead of Rio next year 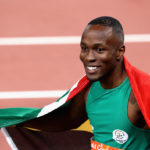