South African former top ranked junior Mariska Venter from Ermelo in Mpumalanga and the country’s number two ranked men’s player Leon Els from Potchefstroom are off to Russia on Thursday to continue their pursuit of Rio Paralympic qualification.
Only the top 34 men and top 22 women in the world rankings on 23 May will qualify for the 2016 Paralympic Games, scheduled for Rio de Janeiro in Brazil from 9-18 September 2016.
Venter is currently ranked 30th in the women’s division and just eight spots away to qualifying. The 19-year-old will compete in two tournaments in Russia, including the International Tennis Federation (ITF) Level 2 Megafon Dreamcup from 30 April – 4 May and the Togliatti Open, an ITF level 3 tournament, from 6-9 May 2016.
‘It is always a brilliant experience to play internationally,’ said Venter, who plans to stage an aggressive game plan in the hopes of making her Paralympic debut.
‘The level of the other players is unbelievable and it really pushes us to up the level of our own games. I believe I have improved dramatically during the two-week at the Airports Company South Africa Gauteng Open and SA Open and that has taken me to a new level.’
Like Venter, world No38 Leon Els is on a mission to use the opportunity to play in the Megafon Dreamcup to break into the top 34.
Els reached the second round of the SA Open, but lost to world number nine Takashi Sanada from Japan in a 6-0 7-6(4) thriller early this month. He, too, believes the experiences against top players has benefited his game.
‘My experiences against top players have really spurred me ahead of the events in Russia,’ Els said. ‘I’ve been working incredibly hard to ensure that I can give it everything when I go to compete. The standard of competition is so high that every match counts.’
Hours of hard training are spent preparing the athletes for the international competitions and performance coaches Holger Losch and Kgotso Matshego believe that regular training with international opposition help their elite athletes to keep improving.
‘Giving our players as much experience of training with and playing against top class international opposition can only help their development,’ commented Losch. ‘We are very grateful for the support from Airports Company South Africa to give our players an opportunity to travel globally.’
Matshego added: ‘We have very talented athletes and Mariska and Leon are some of our most talented rising stars. The experience of travelling internationally and playing against top ranked players in major tournaments is invaluable for them at this stage of their career.’ 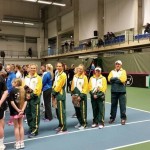 Scheepers in first round exit at French Open

Tokyo looms, again, We don’t know for sure in what shape of form the Olympics and Paralympics will take place in July to September and if anything 2020 taught us to take nothing for granted. What we do know is that if Tokyo 2020 +1 does go ahead, it will do so against a new-found back drop where simply taking… END_OF_DOCUMENT_TOKEN_TO_BE_REPLACED