Fanie van der Merwe and Charl du Toit gave their coach Suzanne Ferreira the perfect birthday present as they celebrated a 1-2 (gold and silver) finish in the T37 100m sprint final at the Commonwealth Games on Monday.

Another South African Andrea Dalle Ave, just missed out on the podium with his 12.39 but had the consolation of notching up a season’s best in an event which is not his speciality.

‘What an awesome honour to compete here with my SA mates and in front of such a great crowd,’ said two-time Paralympian Van der Merwe.

‘I had a great start but stumbled a little bit as I got close to the line. It was still an amazing experience, my first time at the Commonwealth Games and I hope my gold medal is a good gift for coach Suzanne.’

Said Du Toit: ‘I didn’t have a great start but it’s just so nice to be able to give the coach that sort of present. We wanted a 1-2-3 for her but this is next best. The next big one for me will be the IPC World Championships next year and I’m already excited for that as I’m moving back to my favourite 400m event.’

But while there was joy for our para-sprinters, national 100m champion Simon Magakwe and runner-up Akine Simbine both missed out on the men’s 100m final on day two of track and field action.

Magakwe went into the semi-finals on the back of his 10.34sec heat in the morning but, after a slow start, could only improve on that time by 0.01sec in finishing fifth in the first semi-final.

Simbine ended fourth in his semi-final, clocking 10.21sec, an improvement of 0.11sec from his morning heat. That time was the joint equal of the slowest qualifier for the final but the other two athletes who ran that time in the semi went through by virtue of the fact that they had placed higher in their semi-final.

Said Magakwe: ‘Hey, I feel bad … I just don’t know what happened with the start but then I tensed up in the middle as I tried to make up ground.

‘No excuses though, the warm-up went well. It was just one of those days, and not my day.’

Simbine was slightly more upbeat. ‘I was happy with the start and actually my whole race. I was hoping to make the final here but have just missed it by a tiny split second.’

‘It’s just been a long season and it’s really, really tough to peak for nationals in April and then again in July. We need to align ourselves more with the European season.’

He also went on to say he would fancy a move away from high altitude venues, such as Tshwane where he and Magakwe ran their 9.98 and 10.02 at nationals earlier this year, times which count for little at sea level venues.

‘Given the choice, I would prefer to train at the coast, maybe somewhere like Durban,’ he said.

In the only final involving South Africans on Monday, Orazio Cremona ended fourth in the shot put. The giant athlete had a best of 20.13m on the night and was 46cm outside the podium places.

‘I’m heartbroken as I came for a medal, ‘ he said frankly afterwards. ‘But my technique was down and I could feel it. I felt I had the power for a throw in the deep 20s or 21m but the synchronisation just wasn’t there.

‘Now I focus on the African champions which I’m going all out to win. The thing is, you never learn when you win so this experience will make me a better thrower for the other big events like the Olympics etc.’

There was more heartache for decathlete Willem Coertzen who was forced to pull out after the high jump. ‘I competed in an event in Belgium last week and hurt my ankle in the javelin.

‘And today there was just no ways I could get through the high jump because it was on my take-off ankle. It was like 1000 volts going through the foot and I went out on 1.87m which tells a story. It’s sad because this was a massive opportunity for me but I’m worried that this injury could be related to my Achilles tendon and at my age, that could be a career-ending injury so I’ll err on the side of caution.’

Meanwhile, there were no shocks at the Hampden Park Stadium in the morning as all the South African track and field athletes in action progressed to the next stage.  Apart from para-athlete Lean Simon that is. He was in a once-off F42/44 discus final where he ended up fifth.

It was a morning that saw all three of our T37 sprinters go through to the evening final where, all being equal, there should be two or more medals thudding into the Team SA trophy bag.

First up was Du Toit in the first of two heats in the 100m dash. He won in 12.02sec to go through. ‘I had a decent start and then pushed fairly hard for the first 60m. It’s a nice hard track. The next heat saw our other two athletes also move through.

Double Paralympian Van der Merwe blitzed the heat in 11.75 and team-mate Dalle Ave was third in 12.61. Sandwiched between was Welshman Rhys Jones in 12.10.

‘A very nice crowd,’ was Van der Merwe’s first observation. ‘It’s nice to have all of us in the final. There’s talk of a SA 1-2-3 tonight but the final can go any way. There’s definitely a chance though.’

Dalle Ave (also in London for the last Paralympics), in his more familiar long jump event, was happy with his outcome: ‘I didn’t have the best of starts so I reckoned I would conserve my energy which might be a good thing tonight because with us Cerebral Palsied athletes, the lactic acid builds up quicker than in the able-bodied guys. ’

Then it was on to the men’s 400m where rising talent Wayde van Niekerk went off in the second of four heats.  The first three go through automatically to the semi-finals and Van Niekerk did just enough to book his place as he clocked 46.87 behind Trinidad and Tobago’s Renny Quow and Australia’s Steven Solomon who clocked 45.86 and 46.26 respectively.

‘The track feels good but my time was very slow. That means I can only get better,’ said the youngster.

Van Niekerk looked impressive coming into the final bend but although he appeared to be coasting from around 50m out he claimed otherwise:  ‘I tightened up quite a bit near the end, but I thought beforehand that the Trindadian and Aussie guys would probably take 1-2 and all I wanted to do was qualify.

‘I’ve had a nice rest before these Games so maybe this race was just what the body needed to reactivate itself.’

Time will tell whether Van Niekerk really was tightening up or whether he was just taking it easy down the final straight.

Back to Simon though. The product of Porterville in the Cederberg region of the Western Cape opened his campaign with a new African record of 46.37m in the F42/44 discus.  He went on to improve on that by two centimetres, his best effort .

‘This was my first big competition and I really didn’t expect to break the African record, let alone twice,’ he said. ‘I wasn’t expecting to medal here but this will be good going forward.’

Simon competed in the amputee category, after losing his leg below the knee in a motorcycle accident on a farm in Riversdale.

Earlier in the day, The Team SA bowlers captured a third gold medal of the Games as the men’s triples team triumphed at Kelvingrove.  The trio of Bobby Donnelly, Pierre Breitenbach and Prince Neluonde toppled Northern Ireland 19-10 in 18 ends after holding the upper hand from the get-go.

The latest gold joins those already won by the women’s fours (skipped by Susan Nel) and then by the Visually Impaired Mixed pairs.

A third gold means they have equalled their golden haul at the last Games in Dehi. 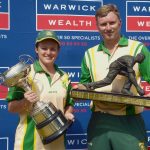 She’s young but ‘old hand’ Botha is gunning for medals