Wenda Theron ran her way into Olympic Games contention on Friday when she ran a personal best time of 55.37 seconds for the 400-metre hurdles at the South African Open track and field championships in Pretoria, writes Mark Etheridge.

Theron’s victory beat the Olympic A qualification standard of 55.50sec by 0.13sec as she beat Oarabile Babolai into second spot by the proverbial country mile, the Botswana athlete clocking 58.92sec.

Three weeks ago the 24-year-old Tukkies athlete ran a personal best 55.79sec to win the national title at the SA championships in Port Elizabeth.

The Worcester-born athlete ran 57:06 in the semis. Later in the year she was runner-up in the final of the All Africa Games in Maputo, Mozambique.

Theron, studying to be a dietician, now needs to run another qualifying time at an international meeting to fulfil the last of three criteria to make Team South Africa for the 2012 Games. The first two were to run the qualifying time locally as well as compete at the national championships. 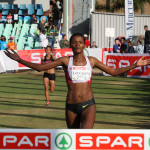 Phalula pulls out all the stops to defend Durban 10km race

Tokyo looms, again, We don’t know for sure in what shape of form the Olympics and Paralympics will take place in July to September and if anything 2020 taught us to take nothing for granted. What we do know is that if Tokyo 2020 +1 does go ahead, it will do so against a new-found back drop where simply taking… END_OF_DOCUMENT_TOKEN_TO_BE_REPLACED