Finally, in the mixed doubles category it was Visser and Van der Vyver who teamed up to beat Nel and Vermaak 21-16 21-12. 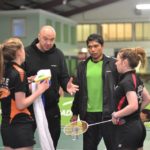 Carson back for second stint as national coach

Tokyo looms, again, We don’t know for sure in what shape of form the Olympics and Paralympics will take place in July to September and if anything 2020 taught us to take nothing for granted. What we do know is that if Tokyo 2020 +1 does go ahead, it will do so against a new-found back drop where simply taking… END_OF_DOCUMENT_TOKEN_TO_BE_REPLACED