Twelve years after he won it as an impetuous teenager, Len Jenkins is older, wiser and hungry to add a second title to his CV at next month’s The Unlimited Dusi Canoe Marathon.

Now 31 and a working engineer, Jenkins’ career has taken many twists and turns, and as he hits his marathon racing prime, he is back to top form, and combined with accumulated paddling wisdom, it sets him up for a serious shot at the title and the record R57 500 prize purse for the overall winner.

This season the Team Shackleton paddler blitzed to his 10th victory in The Unlimited Ozzie Gladwin, a few weeks after winning the prestigious Hansa Fish K1 title for a sixth time in succession, and narrowly lost to Grant van der Walt in the recent flooded N3TC Drak Challenge.

Jenkins openly admits that the race this year will be one of the most competitive ever, but also says that it is in conditions like these that he thrives. “I am the kind of paddler that needs a lot of good racers around me, ” he says. “That is when I am at my best. It all comes down to motivation, and when there are plenty of top guys around me, that’s when I am at my best.”

After a quiet January when he battled with illness Jenkins has bounced back to prime form winning the Crusaders Night race on Blue Lagoon, and has now set his sights on The Unlimited Dusi in a fortnight’s time.

At 31 he can reflect with mild amusement on the way he raced to his only Dusi win as a 19-year-old. “My body doesn’t recover as fast, and I have to train and race differently now. People say that marathon paddlers are in their prime in their thirties, but this is the Dusi. It is a totally different story.”

His Dusi history reads like a switchback thriller. Since his 2001 win, when he dismantled most of the race records, he has not managed to repeat that feat, and has matched some superlative Dusi days with disappointing performances and some inexplicable errors.

In his last K1 challenge he limped home in 22nd position after a disastrous first day, but then followed that with brilliant second stage that saw him catch up 15 places. Last year Jenkins teamed up with world champ Hank McGregor in an effort to try and bag an elusive K2 title, but ended up in second, five minutes behind the defending champions Andy Birkett and Jason Graham.

His much hyped challenge for a Dusi K2 title with Thulani Mbanjwa ended in a spectacular wrap in Ibis Point rapid after they steered their K2 into the monster drop instead of taking their pre-planned line into the short portage. At that stage they were winning the race going away.

His competitors agree that if he can string three typically dominant Len Jenkins days together, he will be a serious threat to the 2013 title.

Jenkins has a unique style of racing, and enjoys going to the front early and staging bold solo charges, which then puts all the pressure on his competitors ÔÇô as long as he can maintain his stamina through each stage.

It is this tactic that is the foundation of his decade of domination at the Hansa Fish marathon, where his ability to go flat out for three hours at a time has seen him unbeaten for six successive K1 races, and left Hank McGregor muttering “Len Jenkins is a freak!”
“It all comes down to motivation,” says Jenkins. “And I am ready,” he adds with trademark nonchalance and understatement. Confidence for Jenkins is shrouded in his laid back demeanour that can border on being dismissive. But when his competitors see that they know they are in for a tough race.

The Unlimited Dusi starts on 14 of February at Camps Drift, and ends at Blue Lagoon in Durban on 16 February 2013. 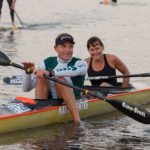 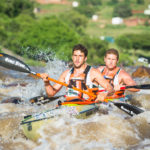