With the ICF Canoe Marathon World Championships a thing of the past, young South African ace Jenna Ward will be teaming up with defending women’s K2 champion Anna Kožíšková for next month’s Fish River Canoe Marathon.

Both paddlers were busy at the world championships with Ward teaming up with Nikki Russell in the K2 showdown where they finished 11th while Kožíšková ended fifth in the K1 women’s race and seventh in the K2 race.

Kožíšková’s traditional K2 partner has been Abby Solms, and the pair won the K2 race at the Fish in 2015 then did the double when they won the FNB Dusi Canoe Marathon in 2016. This year Solms has taken time away from paddling as she is expecting her first child, leaving Kožíšková at a loose end.

Solms became match-maker following a phone call to Ward suggesting that the pair consider paddling the Fish together.

‘It has worked out quite nicely for us considering that both of us didn’t have a partner to paddle with,’ Ward commented. ‘To be honest I see this as quite an honour paddling with the defending champion and someone who has won the Dusi as well!

‘I’m really looking forward to paddling Fish with Anna, and she is such a strong paddler that it is going to be a lot of fun.’

Taking time to prepare and get to know your partner is often the pre-race plan, however with Ward and Kožíšková being over 1000km apart at the moment they will have to wait until the week of the race before getting into a boat together.

‘After worlds, Anna and her whole family went down to Cape Town to see her brother which has meant that we haven’t been able to do any training.

‘But we’ll be paddling the same boat that Abby and Anna paddled so it will be set-up for her already so I’m not too concerned.

‘Also, she got very sick after the World Championships and had to take a week off training but she assures me that she is back and training hard,’ added Ward.

Ward heads into her 10th Fish River Canoe Marathon having never won the race and will be hoping to shake off that bridemaid’s tag that she has been carrying.

The challenge for a consecutive crown for Kožíšková and a debut win for Ward will come from the duo of Olympian Bridgitte Hartley and Serbian star Kristina Bedec.

‘There’s no question it’s going to be tough and there are going to be some strong girls crews but I think our biggest threat will be Bridgitte and Kristina. They won the Liebensbergvlei race over the weekend and with Kristina staying here they will have a lot of time to train,’ says Ward.

‘Kristina is not familiar with river racing which might be a slight advantage but they will be very strong contenders,’ Ward added.

Despite their rushed preparations Ward isn’t too concerned that they will not spend any time in the boat before the race. ‘We’ve just decided to go with the flow and see what happens.

‘We’re both still training hard on our own and she’s a defending champion so I know she’s going to be in fine form. She’s going to be providing the power from the back and I’ve just got to drive straight!’ she added with a chuckle.

The Fish River Canoe Marathon takes place from the Grassridge Dam to Cradock Sports Complex on the weekend of 6-7 October.

Hartley ready for K1 and K4 action at sprint championships 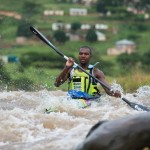 Khwela back into the fray at Non-Stop Dusi

Tokyo looms, again, We don’t know for sure in what shape of form the Olympics and Paralympics will take place in July to September and if anything 2020 taught us to take nothing for granted. What we do know is that if Tokyo 2020 +1 does go ahead, it will do so against a new-found back drop where simply taking… END_OF_DOCUMENT_TOKEN_TO_BE_REPLACED