The world’s top BMX riders put the tough new BMX track through its paces on Thursday in the first practice session ahead of the UCI BMX Supercross at Alexandra Park in Pietermaritzburg with most of the elite riders looking a little nervy as they set out on the newly constructed track.

Despite Mother Nature’s best efforts to disrupt the start of the World Cup season opener action with a week of steady rainfall, the practice session got under way as scheduled with everyone eager come to grips with some of the Olympic experimental elements and put the revolutionary track to the test.

ÔÇ£The track’s hardened up nicely so hopefully there won’t be any more rain today and then I think it should be pretty good come Saturday,ÔÇØ said in-form New Zealander Marc Willers. “The second berm could get pretty interesting especially if a couple of us go into it at the same time but otherwise its pretty cool!ÔÇØ he added.

ÔÇ£It’s probably going to be fairly crucial to get in front as early as possible as its going to be difficult to pass in the middle section,ÔÇØ said local hopeful Gavin Lubbe. ÔÇ£The wind played a bit of a part today but otherwise its been pretty good.ÔÇØ

One of the hot favourite’s for this weekend’s title is Australian Sam Willoughby who decided to sit the first training session out after being struck down by a stomach bug earlier in the week. ÔÇ£Its difficult to say exactly how it is out there having only watched from the sidelines but it looks to be pretty tough and quite tight but I’ll just wait and see tomorrow,ÔÇØ said Willoughby.

Kyle Dodd expressed similar views on the lack of space to pass. ÔÇ£The jumps are a bit harder than they look. You struggle to use your speed you take into the jumps because they kick you so high and with it being so tight its going to be really tough to get around guys.ÔÇØ

ÔÇ£The first jump is something new for us so that’s really exciting and the third straight is a lot deeper than expected so it’s quite a technical course overall but I’m really looking forward to getting out there again tomorrow,ÔÇØ said Alise Post who leads the charge for the strong US women’s contingent.

ÔÇ£Its been a good day today. I think the more we ride the track the better its going to get!ÔÇØ said South Africa’s Youth Olympics rider and KwaZulu-Natal local Teagan O’Keeffe.

Having had their backs against the ropes with all the rain that’s fallen over the past few days Tom Ritzenthaler and his team worked tirelessly to ensure the surface was ready to go and will continue to work overnight making any necessary last minutes adaptions.

ÔÇ£We’re pretty happy all considered but there are quite a few bumps so we’re going to have to shave those out but otherwise it’s been pretty good,ÔÇØ said Ritzenthaler.

With the course being a complete unknown for all there were unfortunately a couple of riders who came off second best. Donavan Mienie and Lunga Mkhize of South Africa had heavy falls along with Julian Schmidt of Germany. Medics however confirmed that all those who sustained injuries were stable.

The first day’s action gets underway with the second practise session beginning at 10am on Friday 8 April.

Platt, Huber make it two in a row at Cape Epic 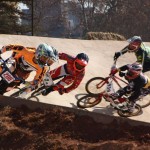 Limberg leads the way as he dominates NAG Series in PMB

Tokyo looms, again, We don’t know for sure in what shape of form the Olympics and Paralympics will take place in July to September and if anything 2020 taught us to take nothing for granted. What we do know is that if Tokyo 2020 +1 does go ahead, it will do so against a new-found back drop where simply taking… END_OF_DOCUMENT_TOKEN_TO_BE_REPLACED