Our national weightlifters returned from the African Youth and Junior Championships in Tunisia with a bagful of medals.

Between them, the six lifters won a total of 21 medals at the week-long championships in the capital Tunis.

Of those medals, 12 were silver and nine bronze. Main medal-winner was Jaco Holtzhausen who brought back three silvers and three bronze medals.

Said SA Weightlifting Federation secretary Gardencia Du Plooy: “On arrival at Tunis International airport, we were greeted by the Vice-president of the Tunisian weightlifting Federation and another gentleman who was a member of the LOC who escorted us through customs and to the awaiting transport. They both made sure that we that our entry into Tunis was swift.”

Two of the original team members didn’t leave with the team to Tunisia. “Brandon Graham withdrew due to school commitments and Neo Litsoaana of Free State could not take part due to the fact that he didn’t receive his passport in time.

Apart from Du Plooy who was also a referee, officials who travelled with the team were: Aveenash Pandoo (national coach and manager), Khati Mabuya (assistant coach) and referee Neville Swart.

“The training venue was 45km away, but we managed to get around it. The lifters got to know one another and I am sure that they became very close. The atmosphere was very relaxing but all of our lifters achieved personal bests. Neville and I were also both examined to upgrade from international category 2 referees to international category 1 referees.”

Du Plooy wrapped up with a note of thanks. “I want to acknowledge the contributions and support of our sport by SASCOC and SRSA as well as our sponsors, the Lotteries board. Without these bodies we could not have been able to compete at these championships.” 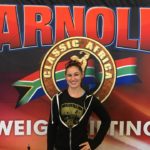 SA’s Fitzpatrick and Pretorius power to Classic medals for SA

Tokyo looms, again, We don’t know for sure in what shape of form the Olympics and Paralympics will take place in July to September and if anything 2020 taught us to take nothing for granted. What we do know is that if Tokyo 2020 +1 does go ahead, it will do so against a new-found back drop where simply taking… END_OF_DOCUMENT_TOKEN_TO_BE_REPLACED