African cycling giants Team Dimension Data for Qhubeka have named their initial 13-rider list to do duty at next month’s Tour de France.
Last year the South African based outfit were the first side from the African continent to compete at the world’s most prestigious cycling event.
And they made an immediate impact with Eritrea\s Daniel Teklehaimanot wearing the Polka Dot jersey for many a day, and ending fifth in the overall team classification.
The team will be made up of six Africans with the remaining seven names all seasoned internationals.
Said team owner Douglas Ryder: ‘We have an incredible squad of riders with lofty goals and big dreams like a year ago. We have new partners and a new look but the same purpose.
‘It is a privilege to be a part of the Tour de France and to be able to leverage the global power of the event to make an impact that matters across the African continent by mobilising people on bicycles through the Qhubeka #BicyclesChangeLives campaign. This year there is an opportunity for you to join us to achieve the Qhubeka5000.
The 13-name squad is: Natnael Berhane, Edvald Boasson Hagen, Mark Cavendish, Steve Cummings, Bernhard Eisel,Tyler Farrar, Jacques Janse van Rensburg, Reinardt Janse van Rensburg, Serge Pauwels,Youcef Reguigui, Mark Renshaw, Daniel Teklehaimanot, Jaco Venter 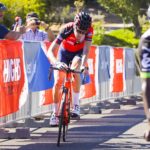 Main wins Tour of Good Hope by one second!

Tokyo looms, again, We don’t know for sure in what shape of form the Olympics and Paralympics will take place in July to September and if anything 2020 taught us to take nothing for granted. What we do know is that if Tokyo 2020 +1 does go ahead, it will do so against a new-found back drop where simply taking… END_OF_DOCUMENT_TOKEN_TO_BE_REPLACED