Anderson had an off-day from singles competition yesterday while he waited to see who he would face next and that turned out to be the dangerous Del Potro, runner-up in the Erste Bank Open in Vienna, Austria last week.

Argentina’s Del Potro beat Russian Dmitry Tursunov in straight sets 6-4 6-1 to set up the clash with 29th ranked Anderson on the Agora court.

Meanwhile Anderson was not idle on Wednesday and was working on improving his doubles ranking. Teamed up with American John Isner they beat the Spanish duo of Marcel Granollers and Marc Lopez in a three-setter, going through into the semi-finals with a 5-7 7-5 10-6 victory.

They’ll also fancy their chances of making the final as there are no seeded combinations left in their half of the draw. Lurking in the top half of the draw though are top seeds Bob and Mike Bryan whose victory in the first round saw them end the year as the world’s top-ranked ATP doubles pairing for the seventh time in nine years. 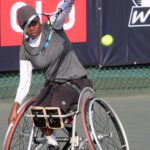 Anderson beaten by Berdych… for the eighth time

Tokyo looms, again, We don’t know for sure in what shape of form the Olympics and Paralympics will take place in July to September and if anything 2020 taught us to take nothing for granted. What we do know is that if Tokyo 2020 +1 does go ahead, it will do so against a new-found back drop where simply taking… END_OF_DOCUMENT_TOKEN_TO_BE_REPLACED