Our top para-equestrian rider Phillipa Johnson has achieved another milestone in her European base of Belgium.

Riding her relatively new mount, Verdi, she achieved one her goals for 2011 on Wednesday.

That was to progress to the Prix St George. She explained to Road to London 2012 on Thursday. “It was┬á a public holiday here in Belgium and we found ourselves in competition in the middle of the week! We competed at the CDN Hulsterlo (able-bodied) which although it’s a long two hour drive because it is outside Antwerpen, the venue is worth the effort.

“We were second in the M10 with 67% out of a class of 17 horses. The most exciting part of this is that we have now scored enough points to move up to the Prix St George which was one of our major goals for this year.

“Verdi has done an extraordinary job this year, he has gained the points to move up four competitive levels in only seven months! ÔÇô we now have two competitions left before I leave to come back to SA in three weeks.”

The South African equestrian and sporting community will no doubt be holding thumbs as Johnson and Verdi ride their first Prix St George on Sunday.

Johnson and Lord Louis are buoyant in Belgium

Johnson wraps up 2013 with a win and second place 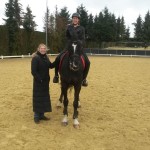 Work to do for Paralympian Johnson and Verdi

Tokyo looms, again, We don’t know for sure in what shape of form the Olympics and Paralympics will take place in July to September and if anything 2020 taught us to take nothing for granted. What we do know is that if Tokyo 2020 +1 does go ahead, it will do so against a new-found back drop where simply taking… END_OF_DOCUMENT_TOKEN_TO_BE_REPLACED