After an impressive string of performances during the first half of 2013, South Africa’s top tennis player Kevin Anderson saw his form slump towards the end of the year.

He reached a career-high 19th position in August, and managed to close out the year in 20th place in the ATP men’s singles rankings despite failing to progress further than the second round in any of the his last eight tournaments, reports Sapa.

The Johannesburg-born, big-server will be out to regain his winning touch in the Brisbane International which kicks off the ATP’s 2014 season on Monday.

“Happy Christmas to everyone! I’m a little late with this post as the 25th didn’t exist for me, not fun!” tweeted the 27-year-old, indicating an all-out effort by Anderson to find his form.

Following a first-round bye, he faces the possibility of a second-round match against 172nd world-ranked Australian Samuel Groth.

Should he get through, he would meet either of two Frenchmen, the eighth-seeded Jeremy Chardy or Nicolas Mahut in the quarter-finals.

If both Anderson and Federer reach the semi-final stage, they would meet for only the second time in their careers, with the world’s 17-time grand slam winner and former world number one having won their previous match in the second round of this year’s Paris Masters by a 6-4 6-4 margin.

In 2013, Anderson reached two ATP finals and progressed to the last-16 stage of grand slam events in Australia and France for the first time in his career.

But his slide reached a focal point and continued to escalate following a 6-2 6-2 6-2 drubbing at the hands of colourful Cypriot Marcos Baghdatis in the second round of the US Open and resulted in several defeats against players ranked much lower than him in the ATP rankings.

Tomas Berdych emerged as Anderson’s nemesis during the year, losing five times to the powerful Czech, including a third-round exit at Wimbledon going down in four sets.

Meanwhile, Mark Etheridge reports that our top-ranked women’s player has ended 2013 on the losing side.

Chani Scheepers was attempting to qualify for the season-opening Brisbane International in Australia. 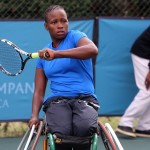 Maripa falls but Montjane, Sithole march on in Benoni

By GARY LEMKE in Tokyo On the third day of staying in the Paralympic village bubble “it” finally dawned on me. “It” wasn’t the sheer visual aspect of the 4 000-plus Paralympians with disabilities all in the same environment of towering 17-storey apartments and surrounded by a 4km perimeter fence. Admittedly, that is the initial and most common conclusion of… END_OF_DOCUMENT_TOKEN_TO_BE_REPLACED