Fun ÔÇô that’s the goal for the Dusi Canoe Marathon from 13-15 February 2014 for surfski stars Hank McGregor and Jasper Mock├® when they switch their preferred oceans for the uMsundusi and uMngeni Rivers during their participation in the three-day race.

However, despite looking to enjoy the three days paddling from Pietermaritzburg to Durban, there is no doubt the pair, pictured right, are also hoping to add the Dusi title to their already hugely impressive repertoires.

As if being one of the three pre-race favourites and going head to head with Andy Birkett and Sbonelo Zondi as well as Lance Kime and Thulani Mbanjwa wasn’t daunting enough, McGregor and Mock├® will look to emerge from the clash victorious despite having several other balls in the air prior to their encounter.

ÔÇ£We certainly aren’t fully Dusi focused. In February we’ll turn our attention purely to Dusi but until then we both have numerous little mountains we want to climb. I have the Drak Challenge, Jasper the Perth Doctor and a few other things too so we’ll just have see how things go for us a little closer to the time,ÔÇØ said McGregor.

ÔÇ£We’re just out there to enjoy ourselves no matter what. We’re not a seasoned crew, we’re just a couple of surfski paddlers and everything for us is a bonus.

ÔÇ£We will obviously look to do the best we can and being up towards the front, possibly finishing on the podium, would be really fantastic and our ultimate goal but we’ll have a good time along the way too,ÔÇØ he added curiously.

Mock├® reiterated the pair’s untraditional build-up approach as he, and McGregor, recently spent vast periods of time preparing for the heap of surfski action in Cape Town.

ÔÇ£I have been purely focused on getting ready for the Cape Town Downwind and the Cape Point Challenge for the past little while so I haven’t been on the river at all since 50 Miler,ÔÇØ said Mock├®.

ÔÇ£Running has also been a long way down on my list of priorities. Obviously you look to keep things ticking over but Hank and I make no secret about the fact that we are a paddling crew going into Dusi.ÔÇØ

Recent years have seen a huge swing in the amount of running preparation those looking to do well in the Dusi have done with may believing that the race is won and lost on the portages, but not Mock├®.

ÔÇ£Only time will tell but I definitely think we can win Dusi by paddling instead of running. Both Hank and I can run well and we’ll obviously look to do our best on the portages but I definitely don’t think you have to be the fastest runners to win the Dusi!ÔÇØ said the Fish Hoek local.

ÔÇ£So many things can happen on the river that you just can’t prepare, as we saw when we wrapped in 50 Miler, for so we’ll just have to see how things go on the day.

ÔÇ£If we see Lance and Thulani or Andy and Sbonelo go down the road ahead of us it will be about damage control for us more than anything else but we certainly won’t panic because we back our paddling ability,ÔÇØ he added.

The unusual preparation style and questions being asked as to whether they can compete with the running of their fellow title rivals, McGregor feels the pressure is in fact off them as he and Mock├® look to enjoy their experience together.

ÔÇ£These really aren’t issues for us. They’re probably actually positiives. We’re doing the race because we want to and we love the whole Dusi vibe. For the other boats the Dusi is their swansong of the year!ÔÇØ said the current Canoe Marathon World Champion.

ÔÇ£We matched up in Ozzie Gladwin in the running, which was very encouraging, and both Jasper and I have done the Dusi competitively before so we know what it takes to be competitive. Winning is a little bit of a different story but I definitely think we could be a crew that could put a spanner in the works for some of the others.ÔÇØ

Mock├® also believes the different race style of his and McGregor’s compared to the other two pre-race favourites will see a very interesting battle unfold in a couple of months’ time as each looks to out think the others tactically.

ÔÇ£For us though its almost like a time trial type of scenario that we find ourselves in. We just have to put our heads down and go as hard as we can on the water.

ÔÇ£The other two boats are brand new combinations whereas even though Jasper and I haven’t raced on the river together before, we’ve been good friends for quite some time now and that can only be an advantage,ÔÇØ said McGregor.

ÔÇ£I’ve always said you need to get on well with a doubles partner to do well and Hank and I really do,ÔÇØ added Mock├®. ÔÇ£It is vital to be happy off the water because that transfers to onto the water as well.ÔÇØ 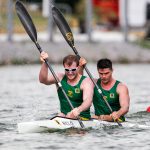 SA duo tame weather to move through in Moscow 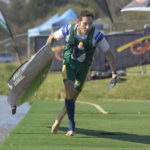