The Rio Olympics are just months away and Banyana Banyana’s preparations for the Games, their second successive Olympic campaign, are in full swing.
The national senior women’s side are holding regular training camps to ensure the players are at peak fitness when the Games kick off in August.
‘We’ve fallen behind in terms of fitness if you compare to when we played against Equatorial Guinea in October last year,’ said head coach Vera Pauw. ‘Our main priority is to keep the fitness levels up. I am glad we are back early in the year so we can get those levels to the highest intensity and to grow even further so we can be fitter and stronger and be able to compete.’
On Tuesday, the players underwent tests conducted by the University of Pretoria.
‘We’re conducting these tests, which will be regular, so we can ensure we keep track and monitor the recovery rate of the players so we know how much work load we need to put in. When you don’t recover well, it affects your performance. So it’s crucial that we get it right,’ added the Dutch national.
Of the playing personnel, goalkeeper Roxanne Barker has left her Iceland club Pór/KA to focus her attention on the preparations for the Olympics. The training programme is jam-packed and will require players to be available all the time.
‘It’s nice to see such commitment and players willing to sacrifice so much to be part of the final squad. We have others who have taken leave from work and school and it gives one pleasure to see so much enthusiasm from the players. Many know that this is a once-in-a-life time opportunity,’ said Pauw.
Meanwhile midfielder Amanda Dlamini has missed the two camps in the new year due to family commitments.
‘We would have loved her to be here with us but in this case, family comes first. We’ve given her a training programme that she’s following so she can be active and is not left behind too much. But obviously, we would love her to be with us so that she is on par with the other players. She can only do that once she is ready, and we understand her situation,’ concluded Pauw.
Banyana Banyana will break from camp on Friday and return on Monday.
Only 18 players will be registered to play for the tournament. An additional four will be accredited but will only feature in the competition if there is an injury to any of the 18. The four will travel, stay and train with the team during the tournament.

In the picture are (left to right) Nompumelelo Nyandeni, Pauw and skipper Janine van Wyk 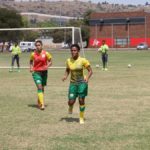 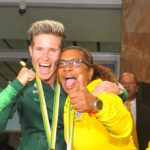