A 23rd minute header from striker Phumelele Bhengu was not enough as the South African Under-23 side were held to a 1-1 draw against Cote d’Ivoire┬á in their opening Confederations of African Football (CAF) Championships Group B tie at Stade de Marrakech in Morocco late on Sunday evening.

Bhengu finished off a cross from fellow forward Rodney Ramagalela, for the crucial break for Baby Bafana, who edged proceedings in the first 45 minutes of the encounter, reports Sapa.

The West Africans, though, had the first chance at goal with striker Kevin Beugre shooting wide in the opening minutes after a cross on the left from Vamouti Diamande. Their second best opportunity came in the 30th minute with midfielder Wakalible Lago’s attempted shot inside the box not having enough power to trouble Brilliant Khuzwayo in the South African goal.

South Africa’s best chance came inside the first quarter with Bhengu shooting narrowly wide of goal, with the busy Ramagalela’s ambitious shot in the 35th minute sailing harmlessly over the bar.

After the restart Cote d’Ivoire increased their attack and had the South Africans against the wall for the better part of this half. Things got worse for Shakes Mashaba’s men when midfielder Thamsanqa Sangweni was sent off for a second bookable offence in the 52nd minute.ÔÇ¿ÔÇ¿South Africa managed to stand firm for a while, dealing very well with the relentless attacks from their opponents.

Mashaba made two changes, brining on Khulekani Madondo and Christopher Flandorp.ÔÇ¿ÔÇ¿In the 65th minute defender Erick Mathoho was adjudged to have brought down an opponent and a penalty was given, but Brilliant Khuzwayo lived up to his name and denied the equalizer.

But he could do nothing in the 81st minute when Cote d’Ivoire leveled matters to make it 1-1.ÔÇ¿ÔÇ¿Five minutes later captain Sibusiso Mxoyana did well to stop the ball on the line with a header. Bhongolwethu Jayiya, who came on for Bhengu, could have scored the winning goal in referee’s optional time but shot straight into the Young Elephants keeper’s arms.

With Egypt having defeated Gabon 1-0 earlier in Group B, they top the group, while South Africa and Cote d’Ivoire share the second spot.ÔÇ¿ÔÇ¿Baby Bafana’s next fixture is against Gabon, while the Egyptians take on the Ivorians on Wednesday where a win could ensure a place in the semi-finals of the final 2012 Olympic qualifier round.

The competition finalists and the winner of the third and fourth place match will progress to the London Games next year with the losing semi-finalist entered into a play-off tie against an Asian Federation country. 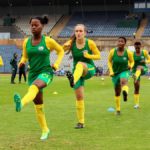