Clark was speaking after South Africa were on the end of a 6-0 shut-out in Monday’s Group A preliminary game at the Riverbank Arena.

“Obviously it’s tough losing but these guys are the world champions. But it’s over now and in effect our tournament really starts now because there are still 12 points on the table that we need to play for.

“Our next game’s against Great Britain and should be a real cracker.”

On Monday’s game Clark said there were encouraging aspects for the South Africans to build on.

“We had patches where we showed what we can do, especially in the last 10 minutes but by then it was too late. I think quite a few of us were just a bit slow out there today.

“The second goal was crucial, coming just before half-time and the the thing is you can’t afford to turn over the ball so high up because a team like this counters so quickly.”

For his part Austin Smith put his hand up. “That second goal came from my error and it cost us. There were just too many basic mistakes and individual errors and at this level because you get punished

“Also a think the guys are just not used to playing at this high a level where you have to concentrate 100%. Individually we didn’t have great games.”

Smith was also full of praise for the crowd who provided a great atmosphere during the game. “The crowds here have got great hockey knowledge, way more than was the case at the Beijing Olympics so it made for a great spectacle.”

SA men’s side hit for six in Argentina 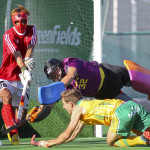 SA down China on penalties after 4-4 draw

SA hockey sides still under the cosh against Argentina

By GARY LEMKE in Tokyo On the third day of staying in the Paralympic village bubble “it” finally dawned on me. “It” wasn’t the sheer visual aspect of the 4 000-plus Paralympians with disabilities all in the same environment of towering 17-storey apartments and surrounded by a 4km perimeter fence. Admittedly, that is the initial and most common conclusion of… END_OF_DOCUMENT_TOKEN_TO_BE_REPLACED