Banyana Banyana will be looking to leave the Olympic Games on a high note, when they take the challenge to World Cup champions Japan in their final Group F fixture, at the Millennium Stadium in Cardiff, Wales on Tuesday afternoon.

Kick-off is at 3.30pm SA time. Despite defeats to Sweden (4-1) and Canada (3-0), captain Amanda Dlamini’s team will leave the world’s greatest sports showpiece richer in football experience. This could prove to be of major value as they prepare to put in a bid to lift the CAF African Women Championship 2012 title in Equatorial Guinea in October this year.

The results in the first two matches mean Banyana Banyana will not progress to the next round.

But the sports world will remember the team for the superb strike from 45 metres out by forward Portia Modise which resulted in South Africa’s historic first goal in Olympic Games women’s football history. This was in Banyana Banyana’s loss to Sweden.

Japan, ranked No 3 in the world, go into the match against South Africa on the back of Group F outings which saw them record a 2-1 win over Canada and a goalless draw against Sweden.

ÔÇ£We are looking forward to the match against Japan, as our styles are similar in that they like to keep and play the ball on the ground and so do we. We had hoped to do well in our opening two matches to stand any chance of proceeding to the next round, but it was not to be and I would like to applaud the whole team for giving their all,” said Dlamini.

“We have one match remaining in the competition and we are confident we can come up with a positive result even though we know it won’t be easy,ÔÇØ said Dlamini.

ÔÇ£On behalf of Banyana Banyana, I would like to thank SASCOC, SAFA and our loyal sponsor Sasol, for all the support that they have given to our team and it was a privilege to be a part of Team SA at the London Olympics.

“We have learnt so much from these two games and we hope they will put us in good stead when we challenge for the AWC title later this year.ÔÇØ 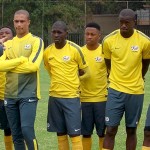 SA U23 men beaten by Brazil but Banyana down Cameroon

By GARY LEMKE in Tokyo On the third day of staying in the Paralympic village bubble “it” finally dawned on me. “It” wasn’t the sheer visual aspect of the 4 000-plus Paralympians with disabilities all in the same environment of towering 17-storey apartments and surrounded by a 4km perimeter fence. Admittedly, that is the initial and most common conclusion of… END_OF_DOCUMENT_TOKEN_TO_BE_REPLACED