Wayde van Niekerk made a bold statement on Saturday night, in the build-up to the World Championships in Beijing in August, chopping 0.14 off his own national 400m record at the Diamond League meeting in New York.
All-Athletics reports that the 22-year-old sprinter from Bloemfontein won the top-flight race in 44.24, improving his South African mark set at the same meeting in the Big Apple last year.
It was Van Niekerk’s second SA record in a week after his new 300m record in Birmingham, England a week ago.
Van Niekerk romped to a comfortable victory, crossing the line half a second clear of former world indoor champion Chris Brown of the Bahamas.
‘I just took it step by step and tried to stay comfortable,’ Van Niekerk told the IAAF website.
‘I am happy with the result and I’m looking forward to the rest of the season.’
Meanwhile, former World Championships bronze medallist LJ van Zyl burst back into form, taking second place in the men’s 400m hurdles race.
The national record holder crossed the line in 48.78, setting his fastest time in his specialist event since the 2011 season.
Olympic bronze medallist Javier Culson of Puerto Rico won the race in 48.48.
In the men’s 100m sprint, Akani Simbine delivered a solid performance, clocking 10.18 seconds into a 1.7m/s headwind.
While Simbine crossed the line in fourth place, Keston Bledman of Trinidad and Tobago was disqualified for a false start, and though the Olympic relay medallist ran under protest, he was disqualified, with Simbine bumped up to third position.
Controversial former world champion Tyson Gay of the United states won the race in 10.12.
Orazio Cremona, the only other SA athlete competing in New York, settled for eighth place in the men’s shot put with a best attempt of 19.51m.
Joe Kovacs of the United States secured victory with a 21.67m heave.
The next Diamond League meeting will be held in Paris on July 4. 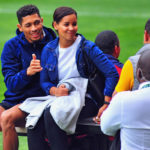 Next step for Caster

Tokyo looms, again, We don’t know for sure in what shape of form the Olympics and Paralympics will take place in July to September and if anything 2020 taught us to take nothing for granted. What we do know is that if Tokyo 2020 +1 does go ahead, it will do so against a new-found back drop where simply taking… END_OF_DOCUMENT_TOKEN_TO_BE_REPLACED