World T13 Paralympic 100-metre record-holder Ilse Hayes took gold in the IPC Athletics Grand Prix meeting in Grosseto, Italy on Saturday, writes Mark Etheridge.
But strong winds (a 3.3m-per second headwind in this particular race) saw the South African unable to dip under the 12-second barrier on the day. Pictured above (centre), the Stellenbosch athlete ended up winning in 12.42 while South African counterpart Anruné Liebenberg, running in the T47 but in the same race, was third with a 13.52 clocking.
Still in the sprints and London Paralympian (as are Hayes and Liebenberg) Fanie van der Merwe won his T37 100m in a time of 12.17sec into a 3.7m/sec headwind.
Later in the 400m races it was Liebenberg who was in action again to win a well-executed T47 event in 58.06sec and she was joined as a winner by Commonwealth Games athlete Charl du Toit who ran a superbly paced T37 race for this stage of the season in 52.10sec.
Sunday will see Du Toit and Van der Merwe taking each other on in the 200m and African 200m recordholder Hayes racing the clock in the 200m.
In the field events Reinhardt Hamman had a disappointing start to his weekend with a best heave of 12.97m in the men’s F37/38 shot put which wasn’t good enough to put him onto the podium.
‘Not the greatest results in the shotput today, only managed a 12.97m but pleased with the effort I put in. Next shotput competition is next week in Berlin,’ said the Capetonian who has a personal and season’s best of 13.77.
He upped his game though in the javelin. ‘That was fantastic. Despite the strong wind I managed a 47.60. If there wasn’t a wind I would have managed a 49 or even 50m. Now I’m looking forward to the Berlin Grand Prix next week’
In the women’s shot put Zanele Situ took first place with a great throw of 16.30m in the T54 category.
And big Durban shotputter Tyrone Pillay also took gold with a 12.71 in the F42 category. That’s a season’s best. ‘Conditions were good and there wasn’t much wind.. circle was nice and quick,’ Pillay told Road to Rio 2016. ‘Next up in the German Open in a week’s time.’
A team of 13 South Africans are in action at this event, a crucial part of the team’s build-up to IPC Athletics World Championships in Doha, Qatar in October. 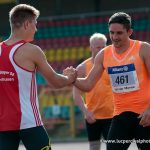 Fanie and Charl show good form ahead of Commonwealth Games

Tokyo looms, again, We don’t know for sure in what shape of form the Olympics and Paralympics will take place in July to September and if anything 2020 taught us to take nothing for granted. What we do know is that if Tokyo 2020 +1 does go ahead, it will do so against a new-found back drop where simply taking… END_OF_DOCUMENT_TOKEN_TO_BE_REPLACED