There’s just no stopping Bridgitte Hartley! She put the seal on a superb World Cup sprint season by nailing another medal, her third of the canoe series in Duisberg, Germany at the weekend.

A member of SASCOC’s OPEX squad for potential 2012 Olympic medallists, Hartley is certainly showing that she’s worth investing in.

On this occasion it was a bronze medal in the K1 1000-metre event, meaning the only medal she missed out in the series was the coveted gold.

But still, two silvers and a bronze from the three events in Vichy (France), Szeged (Hungary) and now Germany is rich reward for the long hours she puts in, on and off the water.

After the first two World Cups it was just Hartley who stayed on to slug it out with Europe’s top paddlers.

Competitors were rewarded with excellent conditions and she ended second in her Friday heat to go directly through to the final. As has become customary she used her strong finish in the last 250m and ended just behind Britain’s Rachel Cawthorn and Franziska Weber of Germany.

“Friday was such a busy day,” said Hartley. “What it did was leave me with another challenge for the future… to become more competitive amongst the top 200m paddlers and stop gambling in the event.

“Luckily I had a small breather on Saturday morning after going through directly to the final. Then Sunday was another really challenging day as we had 500m heats, semi-finals and finals. I woke up feeling a bit ill but snapped out of it after my heat. My bad start came back again in the final but I still finished strong and ended sixth.”

The good news is that Hartley is always prepared to learn.

“I really have learnt so much again this weekend. My 500m heat and semi-final were great with a good start and a good finish so I was super happy about that.”

Now Hartley heads home after a job well done. “My Europe tour is now over and I’m home for a few weeks to enjoy the vibe during the Soccer World Cup.”

And who will she be supporting? “I don’t know who all the good teams are, but it will be exciting to follow as many games as possible. I even got a small card in Germany to write down the results from all the games in each pool leading up to the final.”

But it won’t all be fun and games as the World Championships in Poznan, Poland are only two months away. For now though, Hartley can put her feet up and enjoy a well-deserved rest. 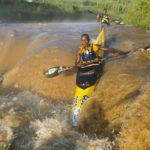 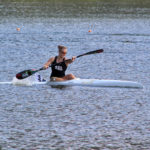