She may not be one of the para-athletes representing Team SA at the Commonwealth Games next week, but she’s had a perfect appetiser, writes Mark Etheridge.

Our multiple Paralympic gold medallist was in action at Saturday’s IAAF Diamond League track and field meeting at the same venue to be used during the Games.

And the Stellenbosch based athlete raved about the experience that awaits our athletes when they get to Glasgow.

“Wow, what an amazing stadium,” she told Road to Rio 2016. It really creates a brilliant atmosphere. It was only half full but created a huge sound. Just imagine it in full swing.

“I was a bit disappointed with my race but just being able to race there was a huge privilege because I was out for four weeks before this with a hamstring injury.

“And the hamstring was good during the race so I am grateful for that.”

Her Glasgow medal means the end of her season. “I ended an amazing season in Glasgow and I’m already motivated to start working hard towards next season because it’s going to be a year of running sub-12 seconds and breaking the 100m world record.” 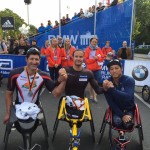 Paralympic gold medallist adds another silver medal to his collection