SASCOC President Gideon Sam has often said he expects Team South Africa to fight till the bitter end to maintain their fifth spot on the medals table at next week’s Commonwealth Games in Glasgow, Scotland.

And among the team of more than 150, who will wear the green and gold, is an 11-strong core who will take those words all too literally.

They are the wrestling squad, whose 2010 members were among the most successful codes at the last Games in Delhi, India.

Nico Coetzee was in charge of that squad and assumes the same responsibility this time out.

And although cautious about this bunch of grapplers, he’s got an optimistic tilt to his voice when discussing their prospects.

“I’m always a bit hesitant because a person can’t sweat about what’s going to happen on the day,” he told Road to Rio 2016.

“But I’m full of confidence that this team will do well. It’s a young squad but with a nice blend of experience at the same time.

“If I look at how Marno Plaatjies, Gerald Meyer and Armando Hietbrink did at the African Championships then I’m predicting good results.

“Terry van Rensburg and Bokang Masunyane also did well at the African Junior Championships, and they’re hungry to do well.”

Coetzee says the women’s squad is also a nice mixture of raw talent and invaluable experience.

“Mpho Madi and Zumi Geringer both ended just outside the podium places in 2010 and will want to make sure to take their chances this time.”

But Coetzee is all too aware of what lies ahead.

“We can’t be under any illusions of the quality of competition. India and Canada are both strong teams with world champions and their own ambitions to do well.”

Summing up, the East Rand-based coach promised that this team would give their very all. “We’ll leave our very best on the mat and won’t stand back an inch. My approach to coaching was always to listen to my wrestlers’ own ideas but also to live in their hearts. In this way I help each wrestler to leave their best out on the mat.”

Hopefully what they leave out on the mat will result in medals rolling into the Team SA treasure chest during the Games. 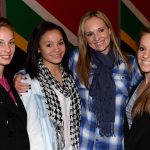