Gold medal winner the one day and out of the top 10 two days later, South African open-water swimmer Chad Ho is refusing to beat himself up.
Ho won the 5km event at the FINA World Championships on Saturday but failed to secure a crucial top 10 spot in the Olympic distance 10km event on Monday. That would have secured him an automatic slot for next year’s Rio Olympics in Brazil.
He does however have another chance to qualify at next year’s Rio qualification event in Setubal, Portugal.
After ending 19th in 1hr 50min 47.9sec on Tuesday Ho told Road to Rio 2016. ‘The 10km was my whole reasoning for being in Russia, my main aim to qualify for Olympics.
‘Just before the race I was feeling calm and ready, I had gone for a warm-up swim and I was feeling good. During the race however it was very hard to get into a rhythm as everyone was swimming all over the place which made it very hard to stay positioned and swim.
‘The pace was a lot faster than I had expected and especially coming into that last 1200m.
‘I just tried to stay focused and with the pack as much as possible but sadly and unfortunately “lost my arms” the last 700m. Although I am disheartened about not qualifying I’m still very happy with how I’ve swum here in Russia and my achievements overall. To win gold in the 5km and then be 19th overall out of 69 finishing swimmers makes me very happy.’
Good to see is that Ho has moved on and is already looking forward.
‘I have no regrets about this trip and remain very focused on getting myself to the Olympics. I have another chance in Portugal in June and I WILL make it!’
Tuesday sees Ho’s fellow South African open-water swimmers, Michelle Weber and Carmen le Roux giving it their all to get to Rio in the women’s 10km swim, with 57 women lining up in search of the top 10 qualification spots for Rio.
And in the water polo pool captain Kelsey White’s women’s water polo side face Australia in their second pool game. They went down 22-1 to Netherlands in their opening fixture and will be wanting to make amends this time out. Australia beat Greece 8-7 in their first match at the water polo arena. 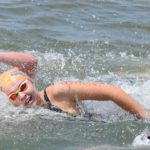 Dynamic Du Toit does it again

Tokyo looms, again, We don’t know for sure in what shape of form the Olympics and Paralympics will take place in July to September and if anything 2020 taught us to take nothing for granted. What we do know is that if Tokyo 2020 +1 does go ahead, it will do so against a new-found back drop where simply taking… END_OF_DOCUMENT_TOKEN_TO_BE_REPLACED