South African Under-23 Olympic Games football qualifying journey continues on 1 August when they host Zimbabwe in the return leg at the Harry Gwala Stadium, Pietermaritzburg.
The two teams played to a 1-1 draw at Rufaro Stadium in Zimbabwe last week although Owen da Gama’s charges felt hard done by the Zambian officials’ handling of the game after awarding the hosts a dubious penalty towards the end of the game with South Africa leading 1-0.
Keagan Dolly had given South Africa a 67th minute lead with a calm finish but with the visitors heading for victory, Zimbabwe received a lifeline when they were awarded a penalty which was converted by Walter Musona in the 83rd minute to restore parity between the two sides.
Still, Da Gama’s side will start as favourites to qualify for the 8-Nation tournament in Senegal at the end of the year in which three African teams that will go to Rio 2016 Olympic Games will be decided.
‘We are not going to take anything for granted in the return leg. Yes, we have done half the job but we need to complete the task on Saturday evening,’ said Da Gama.
As part of their preparations for the Zimbabwe return game, South Africa will play Rwanda in a friendly match at UJ Stadium (next to SABC in Auckland Park) on Tuesday (7pm) before leaving for KZN to intensify preparations. 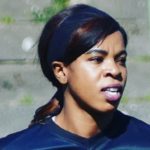 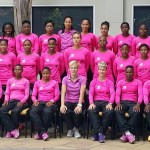 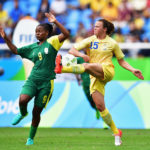 Banyana to host Sweden in the Mother City

Tokyo looms, again, We don’t know for sure in what shape of form the Olympics and Paralympics will take place in July to September and if anything 2020 taught us to take nothing for granted. What we do know is that if Tokyo 2020 +1 does go ahead, it will do so against a new-found back drop where simply taking… END_OF_DOCUMENT_TOKEN_TO_BE_REPLACED