South Africa’s Jordy Smith clinched third place in the Quiksilver Pro France, Stop Number nine of 11 on the ASP World Championship (WCT), to move up to ninth on the rankings with two events still to be run before the 2014 world surfing champion is crowned.
The event was won by Hawaiian prodigy John John Florence who dominated the final rounds of competition held in heaving two to three metre hollow waves, defeating Brazil’s Jadson Andre in the final.
Smith was on fire from the outset, winning his opening encounter in small 1.5-metre waves last week to advance directly to Round Three where he defeated Julian Wilson of Australia. Victory over Taj Burrow, also of Asutralia, and Andre in Round Four saw Smith progress to the quarter-finals. There he defeated current ASP World No2 Kelly Slater (SA) before being eliminated by Andre in their semi-final duel.
‘Felt like I had a good heat against Kelly (Slater), then I couldn’t buy a wave in my semi,’ Smith said. ‘Congrats to Jadson (Andre) though. He’s been surfing well all event and he’s hungry for a result. I’m looking forward to the next one.’
Following the elimination of current ASP WCT rankings leader Gabriel Medina (Brazil) in the quarters, Smith’s clash with Slater held huge title implications and the 11-time ASP World champion’s loss means that the 20-year-old Brazilian can now clinch the 2014 ASP World Title by winning the next event in Portugal.
Florence has been on a roll in recent events, collecting a third in Tahiti and a runner-up finish to Smith in Trestles before his win in the South of France. Florence has moved from eight to fifth on the ASP WCT rankings and has vaulted himself into contention for the 2014 world surfing crown.
South Africa’s Travis Logie placed 13th in France after beating Nat Young (USA) in Round Two before narrowly losing to Slater in Round Three. Logie retains his 31st spot on the rankings and will have to be at his very best in the last two events of the season to move into the top 22 who automatically re-qualify for the elite WCT in 2015.
Meanwhile South Africa’s Bianca Buitendag lost her opening two heats at the Cascais Women’s Pro in Portugal last week to finish equal 13th.
The 20-year-old from George in the Southern Cape dropped from sixth to seventh on the 2014 WCT rankings going into the final event of the year in Hawaii at the end of November.
On the local front, Shane Sykes (Salt Rock) and Emma Smith (Jeffreys Bay) dominated the ASP sanctioned Pro Junior Men’s and Women’s divisions at the third and final event in the Billabong Junior Series presented by BOS at Seal Point in Cape St Francis on Sunday.
The Pro Junior Men’s Final was an action-packed affair with the 4 surfers going for broke in the highly contestable high-tide conditions. Adin Masencamp, showing some fatigue after winning the U16 final, placed fourth, while Josh Smit failed to find the connecting waves and finished third.
Dylan Lightfoot’s fast and dynamic surfing was not able to enough to beat an on-form Shane Sykes, who totally dominated the final and earned the highest heat score of the event in the process.
‘I’m stoked with the way that final went,’ said Sykes. ‘The waves were so much fun out there and with the onshore it reminded me a lot of where I surf in Ballito. I was feeling confident and have had a pretty good run lately, with a good board, so it was a great event or me.
Sykes went on to claim the 2014 Pro Junior Series title as well as the Nixon WTA Award for his massive 18.5 point total in the Final, the highest of the event, and the DaKine Youthful Movement Award for an innovative fins-free move.
The Pro Junior Women’s final was closely fought with Jeffreys Bay sisters, Emma and Gina Smith, placing first and second respectively followed by Teal Hogg and Crystal Hulett in third and fourth.
Emma clinched the Pro Junior Women’s Series title and was awarded the BOS Surfer Of The Series Award for the most consistent surfer across all age divisions by winning all three Pro Junior Women’s events during the year. 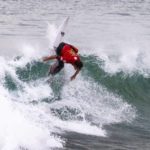 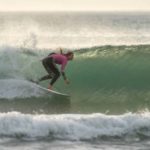 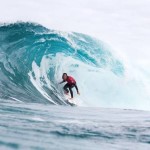 Smith ‘boxes’ clever to reach Round Three Down Under

Tokyo looms, again, We don’t know for sure in what shape of form the Olympics and Paralympics will take place in July to September and if anything 2020 taught us to take nothing for granted. What we do know is that if Tokyo 2020 +1 does go ahead, it will do so against a new-found back drop where simply taking… END_OF_DOCUMENT_TOKEN_TO_BE_REPLACED