Apart from the Rugby Sevens side, life-saving makes up the biggest compliment in the South African team for the 2009 World Games in Taiwan on July 16-26.

Twelve lifesavers will do duty at the 10-day long games in Kaohsiung City on the south-western coast of the island state. The Sevens side boasts a squad of 14.

And unlike some of the other nine codes that will see South African representation, the life-savers definitely have medal potential.

“Definitely yes,” says team official Winston Meyer. “In this team are a former world champion and Commonwealth champion in the form of Armand Marais and Barjo van Niekerk.

The two men’s events are the 50-metre Manikin and 100m manikin tow with fins, respectively.

But Meyer warns that it is by no means guaranteed that SA will medal in Taiwan. “That we will be up there with the best of the world is a given but the team is prepared to give it their all for their country.

“We are expecting a huge onslaught from the Australians and, of course, the current world champions, who are Italy.”

A trader by profession, he would love to swop his fourth place at the last World Games in Duisberg, Germany four years ago, for a medal in Taiwan.

Marais,19, is from Pretoria and is currently studying at Pretoria University. He made history in the 2007 German Cup, when, aged just 17, he won the 100 manikin with fins event, in 49.49sec, smashing the previous record of 51.89sec and becoming the first person to go under 50sec.

Trio hoping to make an impact 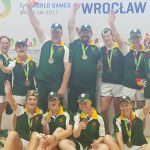 Tug-of-war squad have made great strides for World Games

By GARY LEMKE in Tokyo On the third day of staying in the Paralympic village bubble “it” finally dawned on me. “It” wasn’t the sheer visual aspect of the 4 000-plus Paralympians with disabilities all in the same environment of towering 17-storey apartments and surrounded by a 4km perimeter fence. Admittedly, that is the initial and most common conclusion of… END_OF_DOCUMENT_TOKEN_TO_BE_REPLACED