Darren Lill (DCM) ended South Africa’s drought of stage wins in their inaugural national Tour, when he won the penultimate stage of the Cell C Tour of South Africa in Stellenbosch on Friday

The South African road champion put in a formidable attack, which no one could follow, at the start of the final Heelshoogte climb, then soloed to the finish. Asked how it all unfolded he said ÔÇØmy teammate Ian McLeod did a great job in keeping the pace high, I saw everyone was tired when we got to the final climb and I was still good, so I decided to jumpÔÇØ, reports SuperSport.com

Kristian House (Rapha Condor-Sharp) finished safely in the chasing group, going into tomorrow’s final 104 km stage. The former British National road champion knows Saturday’s’s parade through Paarl should end in a bunch sprint and barring any bad luck, he should win the overall race. ÔÇ£Tomorrow is all about staying out of trouble and fingers crossed I’ll be on the podiumÔÇØ.

The peloton had to negotiate 4 categorised climbs for the day. The biggest one, Franschoek pass, coming after 90 km’s of racing. Former US Postal rider David George (306 Life) put in an attack as soon as the ascent started, and crossed the top of the mountain with a 50ÔÇØ advantage.

However, he was reeled in with 20 km’s to go, by a whittled down bunch exiting the town of Franschoek. Riders kept trying to attack off the front but MTN-Qhubeka, just as they did previous day, set a blistering pace.

Lill decided to counter attack a move from Chris Jennings (Burgos 2016), and immediately opened up a sizeable lead between him and the peloton. Jaco Venter (Veranda’s Willems-Accent) tried to bridge the gap but Lill, a Cape Town born rider, was adamant at getting victory on home turf. Johann Rabie (Team Bonitas) out sprinted the chasing group for second, with Venter finishing third.

Rapha Condor-Sharp manager John Herety said ÔÇ£we played a dangerous game today, relying on the South African teams to chase each other but, it worked out exactly as we planned.ÔÇØ

Burry in the pink 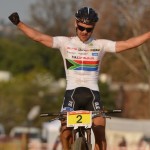 Croeser and Vale top the podium in KZN

Tokyo looms, again, We don’t know for sure in what shape of form the Olympics and Paralympics will take place in July to September and if anything 2020 taught us to take nothing for granted. What we do know is that if Tokyo 2020 +1 does go ahead, it will do so against a new-found back drop where simply taking… END_OF_DOCUMENT_TOKEN_TO_BE_REPLACED